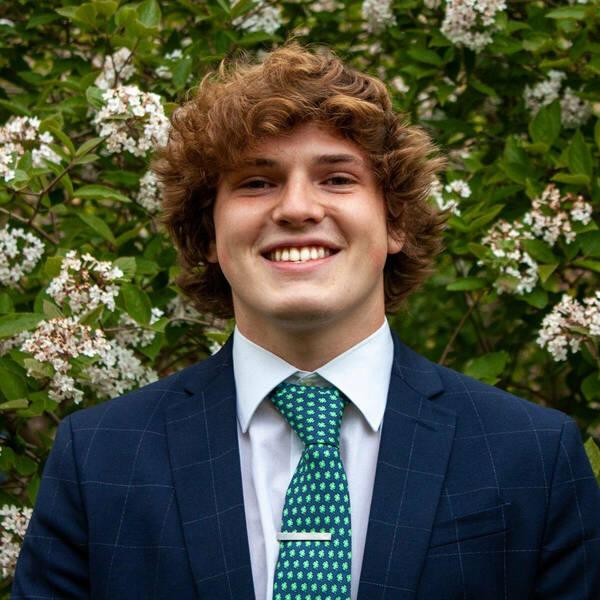 Though he lives off campus now, on campus, Ian lived in Siegfried Hall. Of Siegfried he says, “I think Siegfried does a fantastic job of establishing a welcoming community. No matter who you are or where you come from, there is always a place for you in Siegfried Hall. While it might be notorious for being one of the best athletic dorms on campus, the most valuable thing I gained from living in Siegfried was not championships, it was lifelong friendships.”

He was previously involved with the Band of the Fighting Irish as an Assistant Drum Major and is a former member of the Irish Guard as well as a member of the Hockey Band and Symphonic Band.

He previously worked in Student Government as the Director of the First Undergraduate Experience in Leadership and the Director of the Department of Student Life. Currently, Ian serves as Editor-in-Chief of Spare Magazine, an independent, student-run art magazine. He works in the Office of Admissions as a Recruitment & Visitation Intern, an Outreach & Programming Intern, a Tour Guide, a High School Ambassador, and previously a Student Recruitment Coordinator for the Reilly Spring Visit Program.

In summer 2019, Ian studied abroad in Berlin, Germany with the Summer Engineering Program. Ian’s favorite Notre Dame tradition is singing the alma mater at the end of sporting (et al) events. This is one of the moments where he feels the Notre Dame family most. Among other things, you can ask Ian about going to a school far from home, what it's like to be non-Catholic at ND, band, student government, and honestly anything else you can think of.