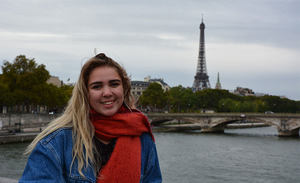 France: the anti-Texas. If everything’s bigger in Texas, it’s smaller here. Imagine taking the U.S. and scaling the whole thing down 7-10%. Maybe it’s because they really care about the environment, maybe it’s because in a Despicable Me-style incident the country was actually shrunk a little.

Compiled below is a list of just a few of many examples from my day-to-day life studying in Angers that are notably smaller here than at home.

Produce here is an entirely different game than in the States. It’s mostly organic, locally sourced and as a result it is often smaller than our mass produced GMOs. Bread is bought daily from one of thousands of bakeries so the loaves are usually smaller and eaten within a day. Even packaged food comes in smaller servings. Luckily it’s totally true that good things come in small packages, the food here is amazing.

This is the one stereotype I’ve found to be accurate; the French are all in really good shape. Though I would estimate the average Notre Dame student is in good health, it’s entirely pervasive here. I suspect it's thanks to how common walking and biking are and their healthier diets.

There are few things I find more stressful than watching coach buses fling themselves down barely-wide-enough alleyways with reckless abandon, but somehow they make it work. I can say beyond hint of a doubt that I would wreck my car in an instant trying to drive here, if I could even fit my car on the roads.

French cars are so small people tend to just stick them wherever they want. It’s not uncommon to see people fully parking their lil’ cars on the sidewalk. Cars are also used less often, not that the streets are by any means empty, but walking is usually preferred if possible. Petroleum products have extra taxes on them so people use their less.

Fire trucks are the size of our delivery trucks. I’m highly concerned that they’re missing something important but my lack of fire truck knowledge stops me from pinpointing the answer.

To give you a clear idea of what exactly I mean; there is no word for ‘mascot’ in French. Trying to explain the phrase “Fightin’ Irish” to a French person is like trying to explain fiscal responsibility to newborns; they just really don’t understand. School sports don’t exist the way they do in America. Sporty French youths who want to play soccer or handball sign up for and play for club teams.

Though there are notable (and adorable) exceptions, most dogs here are tailored for city living and are, as such, on the small side. Luckily, since most people don’t have yards, they have to walk their dogs multiple times a day so I get to see a lot of dogs while walking around town.

The first time I went to the Laundromat, I loaded my clothes and paid to start the machine before I realized it was a dryer. Washing machines here are tiny, about a quarter of the size of the American counterpart, and air drying is prefetred to using dryers.

France loves recycling so they even presort their garbage into three colors. Yellow is paper and various recyclables, green is for glass, and black is for everything else. As a result, they often opt for the ‘three small can’ approach over the ‘one big can’ more commonly seen in America.

Nine out of ten dentists agree I have an unhealthy dependence on Dunkin Donuts iced coffee, and it pains me to acknowledge I won’t be able to consume anything even resembling that sweet elixir until I return home. If you order a coffee you get an espresso in a cute little cup. As a notable exception, I did order a Starbuck’s Pumpkin Spice Latte in Paris and that came standard size.

French women rarely if ever wear shorts. I arrived in September so any chance I would have had of seeing them in shorts was long gone. In fact, about 80% of women at my gym don’t even wear shorts to work out in. However, I’ve observed plenty of French men wearing shorts and “jorts” with reckless abandon. I don’t have strong commentary to offer on this point, I just find it hilarious.

Something that’s bigger in France: storm drains; and it’s terrible. I probably wouldn’t be bothered by this if It hadn’t just come out. Though they’re usually covered, there have been multiple times I’ve seen huge gaping storm drains just begging me to fall in. I’m sorry but I’m not a fan.