Most people think of boxing as an individual sport, but what makes boxing special at Notre Dame is the community.

"What I love about this program is the team aspect," says senior Michael Feijoo, a theology and pre-health major from Queens, NY. Feijoo is a captain and vice president of the Notre Dame Men's Boxing Club for the 2019 season. The club organizes the Bengal Bouts tournament, the largest amateur boxing tournament in the world, currently in its 89th year.

Bengal Bouts is a Notre Dame tradition that built on the men's boxing program organized in 1920 by legendary football coach Knute Rockne. In 1931, the official Bengal Bouts were born, combining sportsmanship and service to raise money for Holy Cross missions in Bangladesh.

After weeks of training and conditioning, around 200 boxers face their teammates in the ring through three qualifying rounds to the finals held Friday, March 1 at Purcell Pavilion on the Notre Dame campus.

In the period of training leading up to the finals, the boxers' focus is twofold as they work on improving fitness, both mentally and physically, and on raising funds for the missions.

"There are a lot of things I love about the Bengal Bouts, but overall I love the Bengal Bouts community's commitment to the club's mission," says club president Ryan Richelsen, a senior mechanical engineering major from Medina, MN. "The club is filled with very dedicated members who work to become better boxers every day. We motivate each other and push past previous mental and physical limits, all while fundraising for something greater than ourselves." 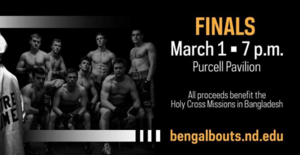 As president, Richelsen played a large role in organizing the 2019 tournament and its related fundraising activities. Funds raised by the Bengal Bouts support Holy Cross schools and health clinics, among other ministries in Bangladesh. This year, the men's boxing club hosted a #19kin19Days campaign on social media with the goal of raising $19,000 in the 19 days leading up to the tournament.

Being part of the boxing community is its own reward for the participating students. "The Bengal Bouts has introduced me to amazing people all while supporting a great cause." says Richelsen. "The Bengal Bouts is in its 89th year and it is amazing to be a part of such a great tradition of hard work and fundraising for the Holy Cross missions in Bangladesh."

If you're interested in getting involved, says Feijoo, "My advice is to go to the first week of practices and try it out! You will never know for certain, whether you will like it or not until you try it." You may just discover a passion for the program and the cause it supports.

"What the Bengal Bouts tournament means to me is that I can challenge myself for the benefit of others," adds Feijoo. "It’s an incredibly rewarding but also humbling experience, and I invite all to consider becoming part of such an amazing 89-year tradition here at Notre Dame."

You can watch the Bengals Bouts finals, streamed online via ESPN, here. Visit the Bengal Bouts website to learn more about the tournament and the men's boxing program.

Notre Dame is also home to a Women's Boxing Club, which hosts the Baraka Bouts to support Holy Cross missions in East Africa.