While the food at the dining halls is top-notch, it goes without saying that variety and choice are two key ingredients in the recipe for a satisfied stomach. Being able to make a short trek to Eddy Street Commons (just south of campus) makes for a fun trip as well as a delicious bite to eat. Thus, it is with my undivided attention that I must dissect a rivalry very near and dear to my heart – the rivalry between La Fortune Student Center’s Smashburger, and Eddy Street Commons’ Five Guys.

I took it to the streets to better assess this pressing issue. In determining the better of the two establishments, the following criteria were used: taste, texture, value, and the all-important “Sweet Jesus-this-is-delicious” factor. To minimize bias, I ordered the same burger from both restaurants, based on whatever I felt like eating that day – in this case, a spicy jalapeno BBQ burger, with bacon. (Because bacon is the best.)

This one was tough. As an avid connoisseur of bacon and bacon-flavored accessories, I can confirm that both burgers presented a satisfying crunch indicative of only the finest bacon products. In addition, the meat from both burgers was succulent, juicy, and glazed with the all-important grease layer. Where the two deviated was in their sauces.

Smashburger’s sauce exuded notes of spicy peppers and umami – a truly exquisite flavor. The combined robustness and excitement of the sauce cleared the path for a taste expedition in my mouth. (Also, I managed to eke out two satisfyingly-flavored burps after consumption, which is most definitely a good sign.)

Five Guys’ sauce, on the other hand, played notes of Applewood and sweetness as it danced around my tongue in an all-encompassing sonata of flavor. Very few things in this world deserve to be called a sonata, and this is one of them.

To be honest, this is entirely a matter of preference – spicy versus sweet. While I prefer Smashburger’s flavors, both have their own merits worthy of praise.

The winner is: TIE 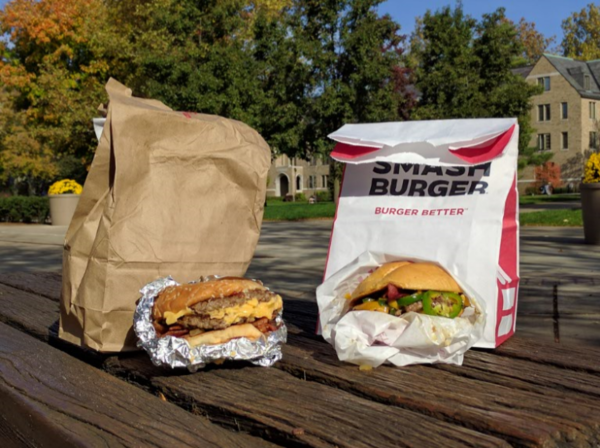 Honestly, it’s the difference between a cheap box fan you bought at Walmart and a Haier air-conditioning unit. Both serve the purpose, one just does it much more effectively.

While Five Guys definitely had good meat, it felt almost sloppy and under-appreciated in its execution. The feel of the meat was much like a round patty of fresh soil. The jalapenos had no crunch to them, and the burger’s only saving grace was its bacon.

By contrast, Smashburger’s meat had just the right amount of bite to it. A very faint crunch supplemented the chew of the meat. Smashburger also had a secret weapon with their burger – fresh jalapenos. The peppers created a contrast that just screams out, “Hey dude, I’m goumet.” Really good stuff.

The winner is: SMASHBURGER 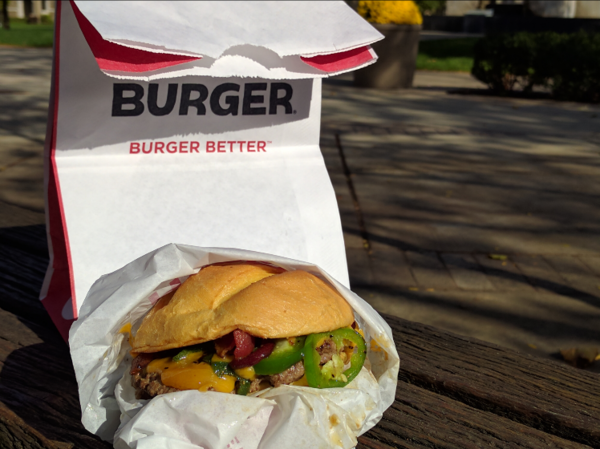 Both burgers were around $8, but Five Guys came out to be a few cents less. Plus Five Guys had slightly more meat. Five Guys wins, but just barely, because it’s a hike-and-a-half to get all the way to Eddy Street Commons. If I’m getting a burger in the first place, exercise is the least of my concerns.

The winner is: FIVE GUYS 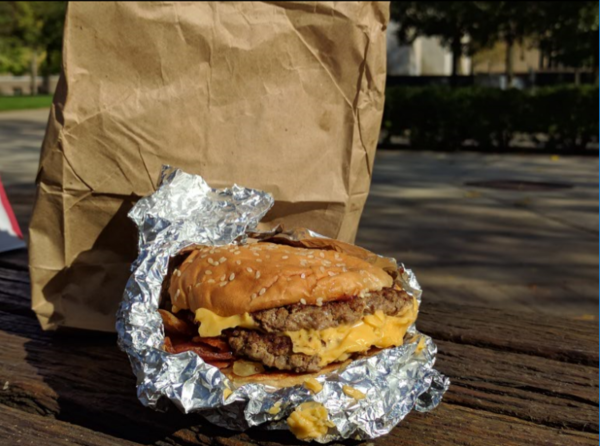 To express what I’m feeling inside, I’ve prepared a poem for this very moment:

My boxers are blue,

There’s no doubt about it. Smashburger has made me a changed man. While I appreciate Five Guys’ attempt to appease my palate, I can’t help but feel their burger was missing something – love. Oh, and the grilled onions I asked for. Yep. Big mistake.

The winner is: SMASHBURGER

Without question, Smashburger receives my stamp of approval. It’s simply more convenient – given the fact that it’s on campus. One’s choice of burger says a lot about a person, and I want my burger to say, “I’m a highly-cultivated young man who knows what he wants. And I want grilled onions. Don’t forget next time.”

A fitting conclusion to a fitting story of romance, passion, and angst. Notre Dame has all kinds of food for all kinds of people. Whether on-campus or off-campus, there’s no denying that your stomach will most certainly find a place to call home under the Golden Dome.