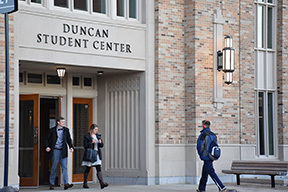 The Duncan Student Center, or the Dunc* for short, is one of the newest additions to Notre Dame’s ever-growing list of good study spots. It’s one of the three buildings from the Campus Crossroads project, and is most likely the one that sees the most traffic on a day-to-day basis. If I had actual stats I could confirm this, but for now, just take my word for it.

The Dunc has been hyped up a lot, and for good reason. Its 9 floors serve various purposes, from housing premium seats for football games to feeding students as they cram for exams. I’m going to walk you through the student center, starting from the upper levels because... best for last. Honestly.

I consider myself a pretty normal student, so if you’re anything like me, you won’t see much of levels 8 and 9 unless you’re there for a stadium event, such as, I don’t know, football. I’m sure these levels have more things going on but my research yields only administrative results. 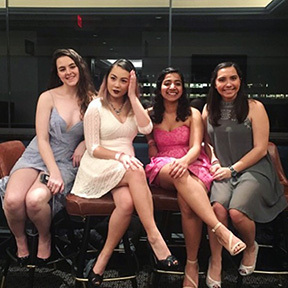 The most important thing on level 7 is the Dahnke Ballroom, which has already hosted a LOT of events, including International Tastes of South Bend, the Cavanaugh-Keenan Formal, and exams (seriously), among countless others. The spacious room doesn’t have a permanent collection of furniture so it easily accommodates for different set-ups for all kinds of events. And for all you Instagram junkies, it’s nicely decorated and overlooks the stadium for some awesome photo ops.

I have no reason to mention level 6 other than people will ask what’s there if I don’t mention it. It’s just for maintenance and mechanical support, so it’s not accessible to students, or to the general public, for that matter.

Level 5 is home to the Center for Career Development. The north side is for graduate students and the south side is for undergraduates, but the really notable part is in between, where the practice interview rooms, meeting rooms, and study spaces are. Guys, there are so many rooms, and they’re all available for reservation whenever you need to prepare for an important interview. Opposite the walled rooms are circles of comfy chairs and tables, perfect for studying, especially if you need somewhere quiet. 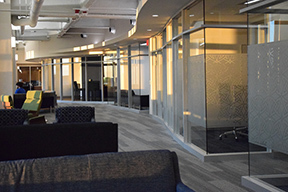 Levels 3 and 4 are the recreational sports facilities, but most people just call this area the gym. This is one of those places I should spend more of my time, both for my physical health and for the beautiful facilities. The third level has basically everything I could imagine in a usual gym, just multiplied to fill the whole floor. This includes elliptical machines, treadmills, weights, dance studios, personal trainers, etc. Name some kind of equipment, and it’s probably there. The fourth floor is mostly the track, and because it’s raised, you get to look down on the different scenes as you’re running instead of just looking at gray pavement. Plus, there’s a climbing wall that actuall starts on the second floor!

And finally, levels 1 and 2, which are the busiest floors of all. The second floor is the new home of several student media organizations, like WVFI, NDtv, and the Observer. The first floor has three different eateries, a cozy space with a wooden stage, and a really awesome fireplace. If nothing else, come to the Dunc for the fireplace. Above the fireplace are a mural and a large screen, and student work peppers the walls in the hallways. Of course, both of these floors are full of study spots galore, from individual bar stool-esque seats to couches and coffee tables perfect for group projects, with outlets by almost every table. There’s also a set of large wooden steps that you can sprawl all over, and they look perfect for a Stick to the Status Quo flash mob. Just saying. 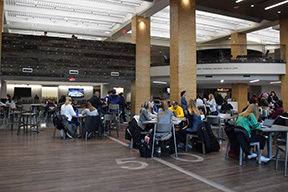 Long mini-tour short, the Dunc has something for everyone, and you could easily spend the whole day there. Currently, the only real drawbacks are that there don’t seem to be any printers and the whole building closes down at 2 am. (LaFun, the older and more familiar student center, has printers and you can stay in the basement 24/7.) That won’t stop me from spending hours upon hours in there, though.

*The nickname has been an ongoing debate among students, although it’s lost its heat recently. I call it the Dunc because it just makes the most sense to me, but other nicknames that have gained traction are LaDunc, DSC (pronounced letter by letter), DSC (pronounced disk), and DuStu. All we know is that it can’t be Duncan because that’s a residential hall.