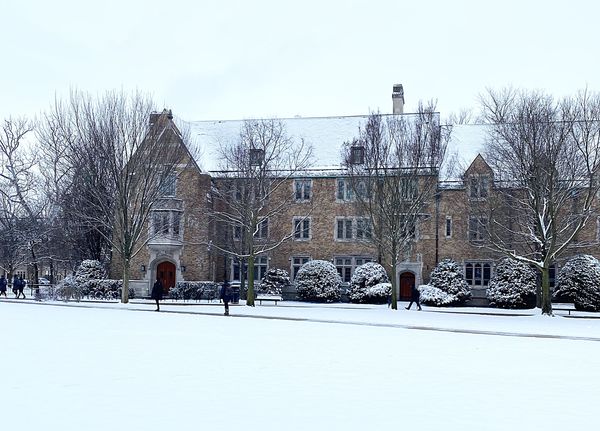 “Notre Dame by choice, Alumni by the grace of God.” -Alumni Hall motto

Alumni Hall stands near the center of campus (and the universe, its residents would remind you), at the edge of South Quad, right on the main circle. The 89-year-old residential hall houses around 225 male residents, lovingly called Dawgs as a tribute to Knute Rockne’s dog, Clashmore Mike. The men in the hall take great pride in their community and traditions, and you can find their signature green and white color combination and the Greek letters Delta, Omega, Gamma strewn through the halls.

Fr. George Rozum (FGR), the beloved former rector, was a source of a lot of Alumni’s current personality, and many events are imbued with his influence and big-heartedness. He retired last year, but current rector Jay Verzosa has been doing a spectacular job leading the Alumni men, however rambunctious they become. Once a week, he cooks a large dinner with his door open and invites Dawgs to sit and eat with him. I can only imagine how stressful it is to take care of over 200 college-age men.

The traditions and personality of Alumni shape each other, and sometimes it’s hard to see where one ends and the other begins. Alumni men support each other through thick and thin, through prayer and participation in interhall sports. Recently some of them have adopted the mantra of “more dudes,” highlighting the importance of just showing up and the power that holds, especially in numbers. They also unite in their rivalry against Dillon Hall, which culminates in the annual Rivalry Week. But the biggest event of the year is Wake Week, which is a week of section competition supposedly “shrouded in a veil of mystery.” It has its own countdown, announced by the hall president at the end of every Sunday night mass.

On a regular week, the St. Charles Borromeo Chapel has mass six times, the most attended one being the 10 pm Sunday mass. Even though I’m not Catholic, I’ve been going to Alumni Mass for four semesters, for the camaraderie and the music! Alumni has lots of talented musicians (quite a few of which are my friends), and they’re well utilized throughout Mass, from the psalms to the Our Father. The chapel is stunningly beautiful as well, and the special Candlelight Masses lend an air of formality to an otherwise casual and low-pressure environment.

I’ve had my fair share of time spent in Alumni, mostly because some of my closest friends live there and they’ve always had a common room that was easy to hang out in. I have a lot of memories and associations with the many aspects of the hall, from mass to formals to game nights with friends. Though room numbers change and college life gets chaotic, Alumni Hall stands tall and unwavering, a steady force to fall back on.