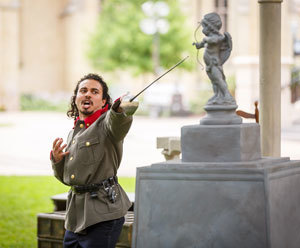 "If you can act Shakespeare, you can act anything." Scott Jackson, Executive Director of Shakespeare at Notre Dame, once said this to Guillermo Alonso ’15, and Alonso took it to heart.

“I've really hung on to those words, and Notre Dame Shakespeare Festival has helped me develop my craft as an actor, as well as nurture my love for classical work,” says Alonso, who graduated with a degree in Film, Television, and Theatre­­­­­­­.

The Notre Dame Shakespeare Festival (NDSF) is the professional theatre in residence at Notre Dame. Each season includes a professionally mounted mainstage production, traveling performances by the Young Company, the community-oriented ShakeScenes program, and numerous specials events including guest artists, lectures, and presentations.

Alonso, who’s been involved with NDSF since the summer of 2014, has been an actor in three productions and served as assistant director in a fourth. He also acted in five mainstage shows at Notre Dame outside of NDSF. This summer Alonso is playing Pericles in Pericles, Prince of Tyre, as part of the Young Company. The group is touring throughout Michigan and the Chicago area.

As a Notre Dame student, Alonso studied abroad in London for a semester, where he encountered Shakespeare's work “like never before.” He attended productions of Shakespeare's plays, including one at the Royal Shakespeare Company and two at The Globe Theatre.

Through The Globe Education program, Notre Dame provides students with the opportunity to study Shakespeare with renowned scholars and practitioners, culminating in a performance on The Globe Stage. “For a young aspiring actor, this was a dream come true! I'll never forget the magical feeling of speaking Shakespeare's words on that stage!” says Alonso.

Alonso has just completed his first year of graduate school in the MFA program at Temple University. He says his NDSF experience has prepared him for a career in the theater. “Shakespeare at Notre Dame really bridges the gap between acting training and professional theatre,” he says.

Members of the Young Company at NDSF receive training in all aspects of performance, including text, voice, and movement. “We have the opportunity to work alongside established professionals, and NDSF has also established a mentorship program that helps young actors network with industry professionals,” says Alonso. “All of these things make NDSF an invaluable opportunity for college-level actors!”