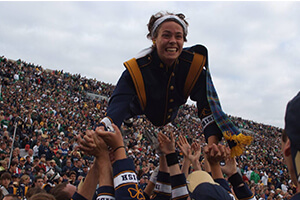 Gruszka does push-ups to celebrate an Irish touchdown at a home football game.

When it came time for alumna Laura Gruszka ‘17 to choose a major, she went with her gut. Music, reading, and writing had always been her passions and she declared two majors at Notre Dame: music and English with an honors concentration in creative writing.

“My mother jokes that, when she was pregnant with me, I kicked to the beat of a concert she attended. I wrote my first story about my stuffed animals when I was six and haven’t stopped writing since,” says Gruszka. “I chose Notre Dame because I appreciated the breadth of education, from theology to science to foreign language, as well as the safety net of being able to change my mind about my majors. My gut was right, though, and these two majors stuck with me for all four years.”

Her love of music and experience playing percussion from the age of 10 led Gruszka straight to the Notre Dame Marching Band. She was a member of the drumline, playing xylophone for all four years. 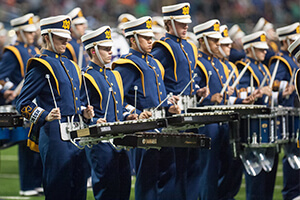 “My freshman year, the band interviewed me to talk about my experience as a band member. I distinctly remember saying, ‘I’m only a freshman, but I absolutely know for certain that joining the marching band will have been the best decision I made at Notre Dame.’” Gruszka stands by that statement five years later. Her experiences in the drumline shaped who she is as a person.

Aside from being part of the welcoming band community, Gruszka learned some valuable skills, such as time management. “The structure of high school was missing, and I didn't know what my study schedule would be like. I found camaraderie in other freshmen band members as well as advice from upperclassmen.”

More experienced band members shared their study tips and favorite study spots. Fellow first-year students invited Gruszka to study sessions at hours that worked on a band member's schedule. “I remember my drum captain freshman year telling me that his GPA was always higher fall semester (during marching band) than in the spring—and, now that I've graduated, I can 100 percent attest to that.” 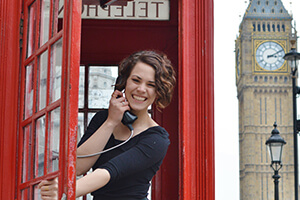 Despite a full course load and a demanding band schedule, Gruszka was also able to study abroad. She spent a semester in London, where she had the opportunity to take classes that engaged with British writers, most especially Shakespeare, from the perspective of British readers and historians.

She also attended performances of Shakespeare at the Globe Theatre and at Stratford-Upon-Avon. “Place became important in these studies, and I valued the opportunity to study in a city so storied and global,” says Gruszka. “Similarly, attending a variety of concerts and going on walking tours to investigate composers’ relationships with London connected me to musicians and composers in a way that wasn’t accessible in South Bend.”

From London Gruszka took several side trips, including one to Spain and Morocco, which were vastly different from London. “I was exhilarated by my first real-life opportunity to use my Spanish skills with not only vendors but also our guides and other students from various universities and countries on the trip,” she says. “I had always wanted to go to Morocco, and while a four-day excursion in the north was barely even a taste of the country, it was undoubtedly the highlight of my semester.” 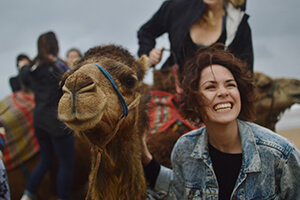 Gruszka's photo from a side trip to Morocco won second place in a study abroad photo contest through Notre Dame International.

Gruszka and her friends rode camels, visited a textile factory, ate dinner in a palace, and took countless pictures of the famous Blue City, Chefchaouen. In the end, she was grateful to have taken a “huge leap” out of her comfort zone to visit a place so wonderfully unfamiliar.

It may be surprising to hear that Gruszka’s Notre Dame experience started with a deferred admission decision. “I was deferred from early action and was accepted during regular action,” which she says she didn’t want to admit when she did make it to Notre Dame. “But here I am: I graduated magna cum laude, made incredible friends, studied abroad in London, was accepted into an Ivy League MFA program, won a photo competition, and am writing this interview right now. I didn’t just go to Notre Dame; I thrived at Notre Dame. I was there for a reason, and it took me time to believe that. It doesn’t matter who got in first or who got in last; it’s what you do with your time at Notre Dame.”