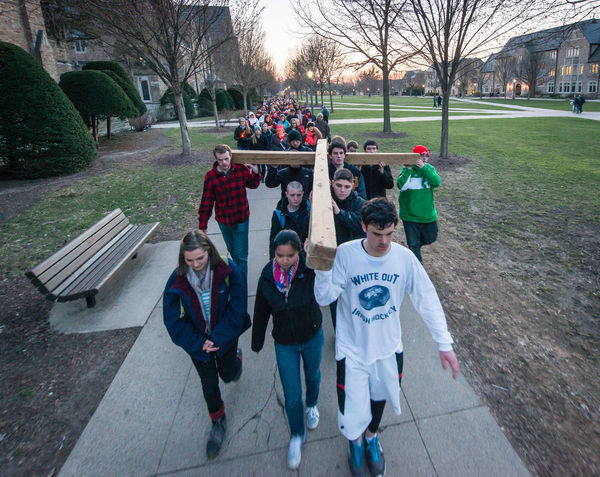 Before the advent of articles peppered with sports clichés, St. Paul drew a comparison between the Christian life and physical fitness when he encouraged the Corinthians to “run so as to win,” explaining that he “[does] not run aimlessly” but “[drives his] body and [trains] it, for fear that, after having preached to others, [he] myself should be disqualified” (1 Cor 9: 24-27). Informed by a similar commitment to academic and athletic excellence, Notre Dame offers students a host of opportunities to exercise the discipline of Lent through prayer, fasting, and almsgiving.
Prayer
Participate in the Knights of Columbus’ “Fast, Pray, Lift: 40 Days of Faith and Fitness” program and enjoy daily spiritual reflections and workout plans during Lent 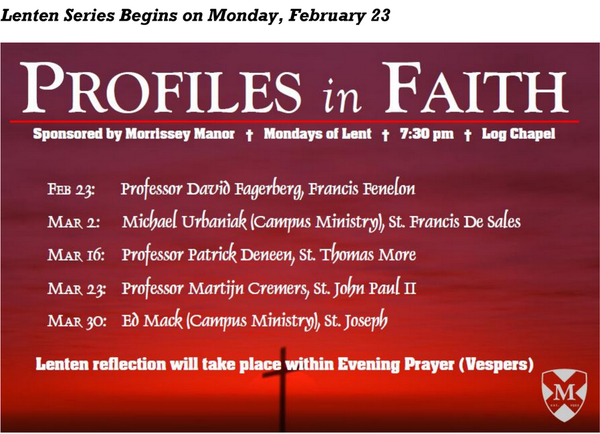 Join the men of Morrissey Manor at their Lenten series, "Profiles in Faith," which features a reflection offered by a campus speaker followed by vespers, during Mondays at 7:30 pm in the Log Chapel
Fasting
Save the environment with GreeND through its “Go Trayless for Lent” campaign and refrain from using dining hall trays as a means to reducing food waste
Check out the Wednesday Lunch Fasts and learn more about how Food Services donates the money from meals not consumed by students to the American Hunger Coalition
Almsgiving
Donate to the Catholic Relief Services Rice Bowl initiative, a program organized on campus by the Center for Social Concerns and Campus Ministry. Bowls can be found in residence halls and your financial support will help fund international humanitarian efforts
Prepare a Friday dinner for the residents of the Catholic Worker House or Dismas House in South Bend and share the meal with members of the local community
Volunteer to teach English to immigrants with the Community Alliance to Serve Hispanics