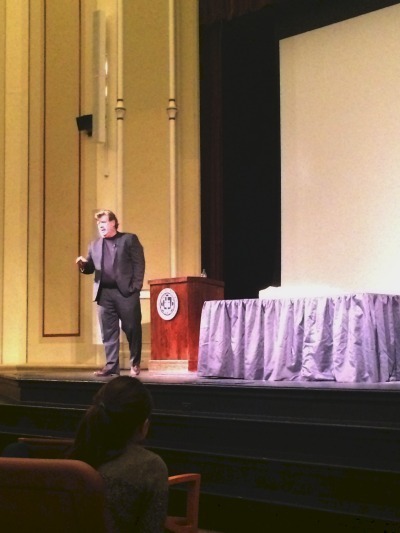 A lot of what I do for my position in the Student Union Board (SUB) is bringing interesting speakers to campus for the betterment of the student body. Along with being a programmer for the Ideas and Issues committee, I am also in charge of the Notre Dame Literary Festival. This year, my group and I decided to bring co-author of American Sniper, Scott McEwen to campus to speak about his experiences writing the novel, producing the movie, and his other works that he has written. Here is a glimpse into what a SUB student event is all about!

Before his talk, my committee, our board of directors, and I all went to dinner with Scott at Legends. Throughout dinner, we were able to ask him any questions we had including what he does on a daily basis and how it was producing a movie with Clint Eastwood. He was such a personable guy that there was no awkwardness at all. I felt as if he was an old family friend who we were just catching up with for the first time. After dinner was over, we rushed over to Washington Hall to help him prepare for the event and make sure everything he needed was ready.

I can proudly say that I was really blown away by what Scott had to say about his experience writing the book. Scott started his talk by saying that the book is exactly about war. It is an anthem of what Chris Kyle experienced in war. American Sniper is a story that focuses on one of America’s most lethal snipers Chris Kyle and his experiences in war, with PTSD, and his death. He said that a lot of people wanted to change the story, but he stuck with his original idea because he believed in it so much. He decided to stick with the truth because it was the core idea of what Chris believed and what he was really all about. Scott said that it was important to maintain their passion for the truth because that is what contributed to the success of both the novel and the movie.

He then described how he got the project off the ground. Scott first heard the stories from many bar conversations that he would have with Chris when they would meet up. Scott knew that Chris’s story was something that needed to be heard. They started with a document called a treatment. The treatment was where they described their ideas to the publisher. They had to establish their case as early as possible and had to make sure that they compelled their audience to turn from one page to the next.

Once given the go-ahead to write the book, Scott began recording the discussions that he had with Chris. He also went beyond just discussions and asked Chris to pull out different medals and explain them. He asked Chris questions like, ‘What were the gun shots about? What did it smell and taste like? Was it scary?’ Scott was determined to make it as real as possible and to reflect what soldiers really went through throughout their time in Iraq.

He also recorded his conversations with Taya, Chris’s wife. The purpose of this aspect of the book was to show the two experiences, the experience of the family at home compared to the experience of being in the war. He mentioned the moment when Chris was talking to Taya through his satellite phone, which was common for soldiers gone for long periods of time, when a firefight broke out. Chris dropped his phone, and she was left on the line. She listened to the fight for 45 minutes before the phone died. She did not hear from Chris for three days and could not contact anyone about it because Chris was not supposed to use the satellite phone for personal phone calls. 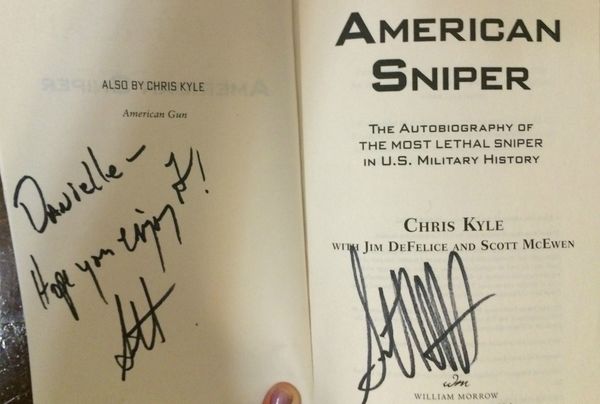 After the book was published by Harper Collins, it immediately went to the bestsellers list and movie negotiations began. Scott worked with a man named Andrew Lazar, who had worked with Clint Eastwood before. Scott said that Bradley Cooper was very interested in playing the role because he wanted to move away from his Hangover days and onto something more serious and tough. When they brought the idea to Warner Brothers, they did not want to continue with it because they thought no one would want to watch an anti-war movie and that it would not make any money. After a few offers from other producers and directors, Clint Eastwood finally came forward saying he wanted to take on the film.

The movie was shot in 6 weeks and took 65 million dollars to make. Scott said that for only having two hours to portray 400 pages of information, the movie did a very realistic job of portraying Chris Kyle. Scott also talked very highly of Bradley Cooper in his role as Chris Kyle.

Because of his friendship with Chris, Scott was able to meet more warriors who he has decided to publish books about. He started the Sniper Elite series, which is about a man who had been shot over 14 times while fighting. Scott built up a character around this man’s story and is now on his forth book in the series.

He also mentioned the continuation of the American Sniper series. Although it will not be a sequel to Chris Kyle's story, it will be based on one of the commanders who was on Kyle’s team. It will be called American Commander and will focus on the perspective of the men who train, assign, and write letters for the SEALS. 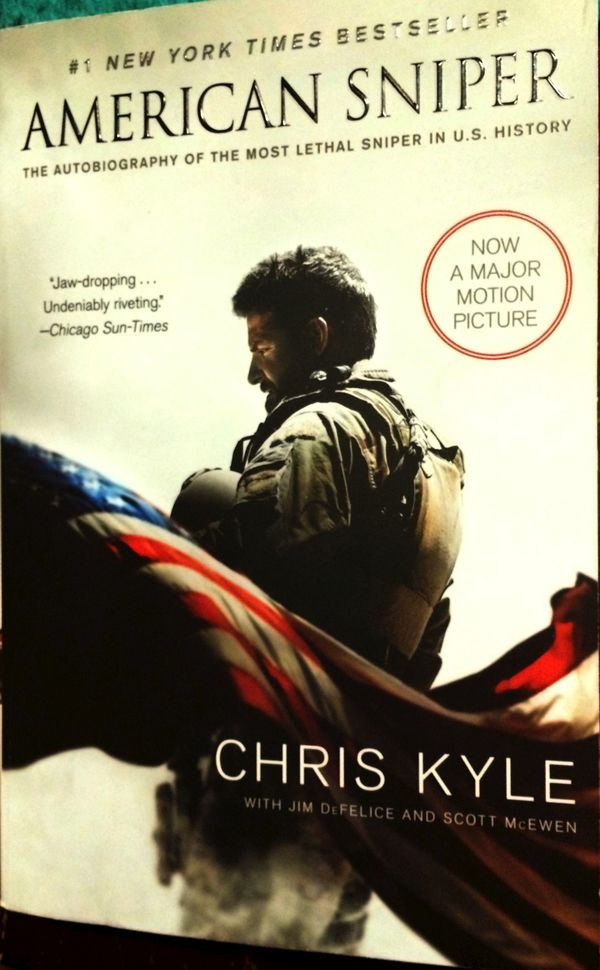 Scott ended his talk about applying what he learned about his experience with soldiers, and what we as college students can learn from these experiences. He said that there is always more for us to do. We, as a community, need to understand the load that soldiers and their families face. A lot of soldiers coming back from war need help and we owe it to them to help them. He said we need to understand that they deserve recognition and support from everyone.

This is just one example of the many events that SUB produces here on campus. Powerful talks such as this are not unusual here at Notre Dame. There are often opportunities for students to hear people talk about experiences that they face in the outside world and how it directly affects us as students. For another example, check out my previous blog about "To Write Love on Her Arms."