Every summer on July 14th, the country of France pauses to celebrate Bastille Day, also known as La Fête Nationale. Fortunately for me, I will be spending my second Bastille Day in the capital of France!

Historically, Bastille Day commemorates the French storming of the Bastille, a medieval prison in Paris, on July 14th, 1789. This was a key event in the French Revolution, which had only begun days earlier. Additionally, La Fête de la Fédération occurred on July 14th, 1790, which celebrated French unity. To honor this event and the passion of the French revolutionaries, Bastille Day is celebrated with an annual military parade on the Champs Elysées in Paris. At night, a musical fireworks show occurs by the Eiffel Tower.

Unlike the Fourth of July in America, Bastille Day is more of a stoic event. Originally, I expected extreme patriotism similar to how the French celebrated on game days during the Euro Cup soccer tournament, also hosted by France. I witnessed hundreds of face-painted fans carrying French flags and adorned in red, white, and blue everywhere in Paris each time France had a soccer match. However, during La Fête Nationale, no one seemed to “dress for the occasion” as I assumed would occur.

Instead, thousands of French men, women, and children line the Champs Elysées and neighboring boulevards to witness the grand military parade in the morning. Unlike the Thanksgiving Day Parade in America, this “parade” is more of a ritual than a celebration. It is peaceful, respectful, and quite moving. As I watched the rockets fly over the Arc de Triomphe, I stood in awe gazing at the red, white, and blue smoke.

Another common Bastille Day tradition among the French is to spend the day at a park, leisurely enjoying a bountiful picnic with friends and family. Just as one would expect, everyone’s meal consists of baguettes, assorted cheeses, fruits, meats, and delicious French pastries. Thousands of Parisians flock to the Champs de Mars in front of the Eiffel Tower for an afternoon lunch, and many stay for the late-night fireworks.

Instead of camping out all day, I decided to watch the impressive show from Pont Neuf, one of the bridges over the Seine. I thought that I was being clever picking such a location, but hundreds of people lined the street by the time the fireworks began promptly at 11:00 pm. After the firework show ended, I ran to the nearest metro to beat the rush to get back to my apartment.

The Bastille Day traditions continues, however, late into the night as fire stations around the city host parties known as “Bals de Pompiers.” Visitors are kindly asked to make a donation to the fire department upon entry. While I have yet to experience this cultural tradition, it is definitely on my list! 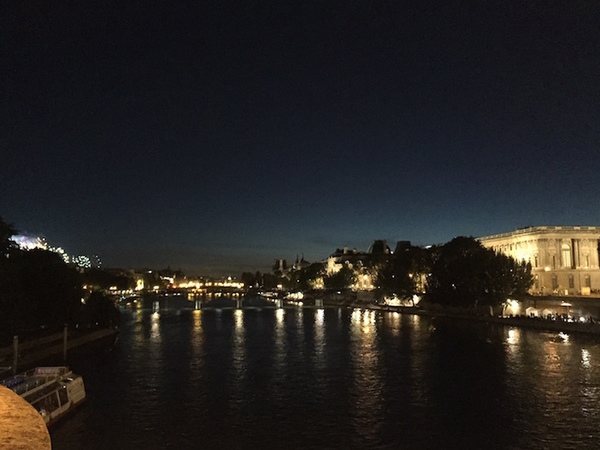 Even though I missed American Independence Day, I am thrilled to have experienced a new culture’s national celebration. While many of the individual customs in France are different from those of the United States, the general sentiments of relaxation and enjoyment of the summer weather among friends and family remains the same in both countries.