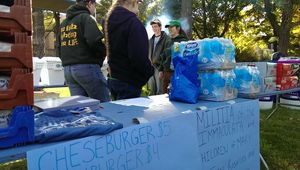 Although grilling as we know it today developed in the 1950s, one can argue that Notre Dame has earned a privileged place in the art of concession stand operation. Students and faculty have been selling game day grub and gear for as long as crowds have craved hot dogs and hamburgers, a symbiotic relationship based on the fantastic football weekends that have made the University famous.

Last weekend, I helped manage the Militia of the Immaculata’s concession stand before the game against the University of North Carolina. MI is the campus chapter of a global group founded by St. Maximilian Kolbe in 1917 and is committed to spreading Marian devotion. All proceeds would go to our keynote speaker fund, which we hope will bring Dr. Scott Hahn, a famous Catholic theologian, to ND.
Having four years of concession experience under my belt, I recognized the amount of preparation required for maintaining a successful stand. I was, however, fortunate enough to have the assistance of two up-and-coming MI underclassmen to help me with the necessary arrangements: Brian Buechler, a sophomore mechanical engineer, and Rose Anderson, a sophomore history and theology major.
Three weeks before the game, we composed an SAOnline request form for our concession stand. SAOnline is the electronic program ND uses to organize campus events. We also had to attend a Concession Stand Training Session, an hour-long course on food safety, security, and sales strategies. The following week, I submitted a cash advance form and called Catering... By Design for our food order. MI purchased the default order (which probably seems like an astonishing amount): 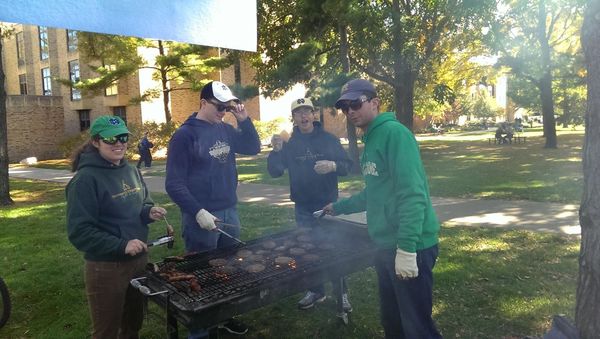 Like all concession stand managers across campus, I spent the five days before the UNC game with frequent bouts of doubts. Would they lose our meat order? Will it rain on game day? Would we have enough workers? Did I remember to order buns!?
Recalling my innocent sophomore self, I chuckled about the time I had forgotten to order buns for a concession stand, an unfortunate stumble in judgment that obliged me to purchase more expensive ones from Meijer. There also seems to be an inverse relationship between the rise of poor weather and the purchasing power of potential customers since people are reluctant to consume wet brats and soggy burgers.
Luckily for me, the crisp Saturday morning proved to be a perfect day for selling food and drinks. Besides the challenge of keeping the charcoals lit, operations went smoothly.
“At first we struggled with grilling and keeping up with the demand for food, but we learned quickly and nearly sold out by the end of the day,” Brian said.
Rose enjoyed being able to participate in football weekend festivities from a different perspective. She believes that the concession stand helped club members get to know one another as well as fans from both teams. “Although we were just cooking burgers, brats, and hot dogs, we were also helping the families who came to campus have an enjoyable game day experience and get excited for the game itself.” 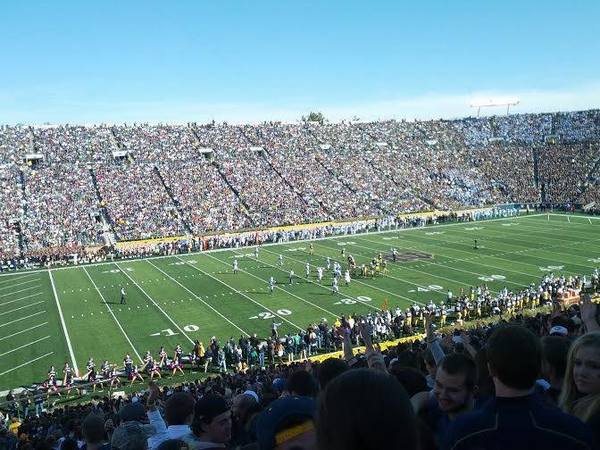 In a way, the conclusion of my tenure as a concession stand manager at ND is a bit bittersweet. I’ll miss the deadlines, high-pressure situations, and the satisfied smirk of a customer biting into his long awaited burger. I will certainly feel a bit nostalgic for the general fatigue produced by working for about six hours with the only solace being an Irish victory and raising funds for a good cause.
“The MI concession stand was a great opportunity to interact with students, alumni, and visitors — even those rooting for the opposing team,” Nicole O’Leary, a freshman theology and history major, said. “It transformed game day into an opportunity to work for something even more important than football, and consequently, my experience later that day at the game was more rewarding and enjoyable because of the work that I had done in the morning.”