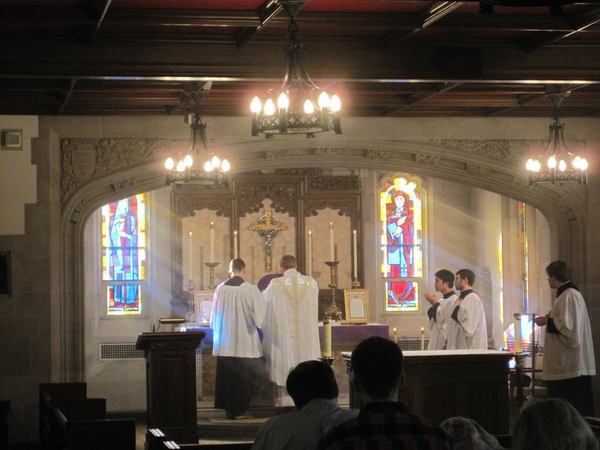 An atmosphere of stillness pervades the Gothic chapel, a placid peace preparing the people for prayer. Luminous whispers of morning light pierce the stained glass windows and transform the chamber into a muted mosaic of color. Those gathered in the pews are marked with a profound patience preserved by the prayerful pause. The thoughtful tension in the air is then broken by the gentle peal of the sacristy bell.
A shuffling of cassock and surplice signals the beginning of Mass. The student schola harmonizes the introit with the careful cadence of Gregorian chant, the ethereal echoes of a distant history made presently tangible. Rev. Thomas Blantz, C.S.C., kneels and recites words inspired by devotion and informed by tradition.
“Introibo ad altare Dei.”
“I will go unto the altar of God.”
The Extraordinary Form of the Mass (aka the Latin Mass) is celebrated each Sunday at 9 am within Alumni Hall. The Mass has an average attendance of 50-75 individuals in a language which most people only see on their dollar bills or in science textbooks. The Children of Mary, a campus club dedicated to promoting different Catholic devotions, trains servers and organizes the liturgies held in St. Charles Borromeo Chapel. 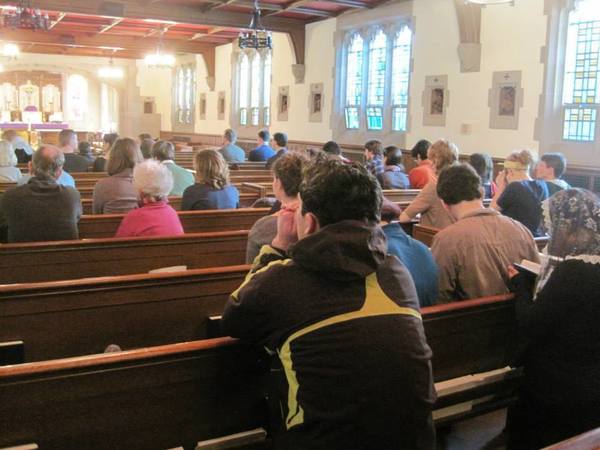 Some may argue that praying in Latin is too difficult to attempt, yet many students discover the depth of the Church’s heritage within its declensions and archaic tone. Jacob Lindle, a sophomore majoring in theology and philosophy, began serving at the Latin Mass last month.
“I realized that the Mass is not just some social event which I can just expect to show up, stay my time, and leave right after,” Jacob said. “The Mass is sacred, and my preparation for serving the EF has helped me to realize exactly that.”
The Latin Mass is the result of an organic development in liturgy, a period spanning from its official formulation in 1570 until 1962. After the Second Vatican Council, the global Church witnessed a rise in the celebration of the Mass in local languages. Today, Notre Dame is home to English, Spanish, and French liturgies.
The older norms and traditions of the Latin Mass encourage many people to immerse themselves in a prayer which embraces their senses with incense, altar bells, and candlelight.
“I attend the Latin Mass because I believe it is a reverent, traditional, and beautiful way to experience grace,” Logan Hayward, a senior finance major, said. “ I think aspects like the priest facing the altar and the people receiving the Eucharist on the tongue while kneeling, help us focus on Jesus.” 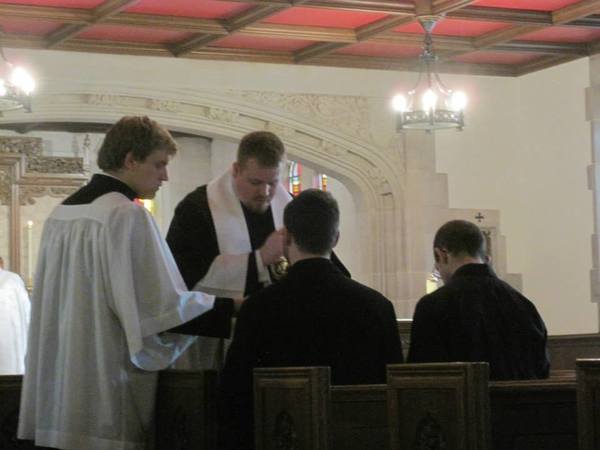 Alongside students, men and women from South Bend come to Alumni Hall to attend the Latin Mass, a liturgy reminiscent of their grandparents. Senior Andrea Buechler enjoys how she can participate in living history every Sunday by simply walking across the quad. “Having the Extraordinary Form on campus provides students with an opportunity to experience the rich tradition of the Catholic Church.”
Although associated with the past as a “dead” language, Latin appears to be alive and well at Notre Dame. For more information about the Latin Mass, check out Campus Ministry’s helpful guide. Buechler believes that its universal appeal has contributed to Latin’s liturgical success on campus. “After studying abroad in Europe, I also better appreciate the unity that comes from a common language of the Church, knowing that people all around the world are praying with exactly the same words as I am.”