One of the many rewarding parts of studying abroad in Rome as a Catholic is spending holidays in the Eternal City. Over winter break, I was able to spend Christmas in Rome with my family, and just last weekend, I was lucky enough to spend my Easter with Papa Francesco at St. Peter’s Square! 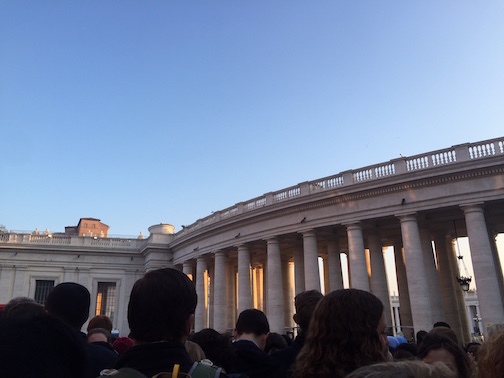 Unlike students on campus in South Bend, we had a weeklong spring break leading up to Easter in Rome. Additionally, we had Easter Monday off, known as “Pasquetta,” or “little Easter” in Italian. Although I traveled to Greece for Spring Break with a friend, we made it back to Rome by Friday night, just in time to enjoy the full Easter holiday weekend in Rome. Luckily for us, the weather in Rome Saturday and Sunday was beautiful! It seemed like spring had finally arrived just in time for the tourists who flocked to Rome for Holy Week. 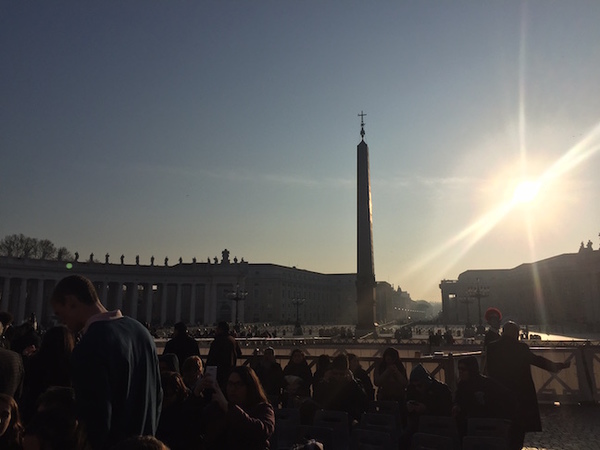 For Mass at the Vatican in St. Peter’s Square, Notre Dame sold tickets to students studying abroad and those on campus. This was a huge convenience for us, as scrounging for tickets to Christmas Mass at the Vatican was nearly impossible. All we had to do was purchase the ticket online and pick them up in Rome the Saturday before Easter.
Sunday morning, we met other Notre Dame students studying in Rome through the John Cabot University and International Scholars programs outside of St. Peter’s Square at 6:30 am. It was an early morning, but the atmosphere was full of excitement as people from around the world began to line up outside the colonnade.
Besides us students studying in Rome, dozens of groups of Notre Dame students studying in Dublin, London and beyond reunited for Mass. It was great to see some familiar faces, most of which I hadn’t seen since September when I visited campus before flying to Rome. Our Notre Dame Irish community was strongly present in the crowd to say the least. 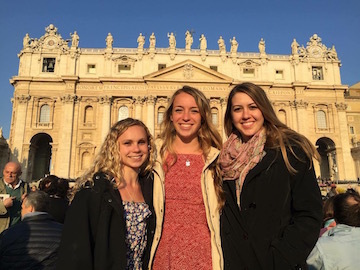 Police officers and security officials opened the gates to groups at a time beginning at 8:00 am. Surprisingly, security was fairly efficient, and we made it into the piazza around 8:30-9:00 in the morning. We were even able to grab a large group of seats for all of us to sit together for Mass.
Pope Francis, or “Papa Francesco” here in Italy, promptly addressed the crowd for Mass at 10:00 am. Even though there were hundreds of people in the crowd, the service remained intimate and sacred. To promote inclusivity, the readings were spoken in Spanish, French, and Greek. The petitions were shared in Arabic, Chinese, Russian, and English among others. For the homily, Pope Francis led a couple minutes of silence for private prayers and petitions. 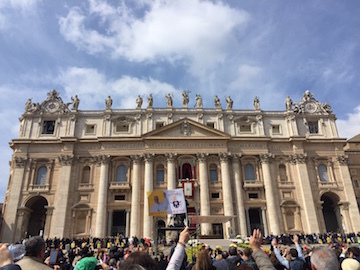 At the conclusion of the Mass, Pope Francis sped through the crowds on a car surrounded by security. The energy in the crowd was electric as people of all ages cheered on the pope. There was nothing but happiness in St. Peter’s Square that morning!
Following his ride, the pope retreated to the window above St. Peter’s basilica for his annual blessing. It was difficult for all of us to understand in Italian, but it was still special being there for that moment.
It was an early morning, but it was worth it to experience this once-in-a-lifetime event surrounded by fellow members of the Notre Dame community. Buona Pasqua!