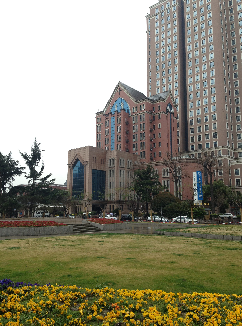 When it comes to attending mass at Notre Dame, I’m absolutely spoiled with options. In addition to Sunday mass, every dorm also offers at least one additional weekly mass that builds community through a themed social time afterwards. For example, Ryan Hall hosts Waffle Wednesday mass, where my dormmates and I can receive both a homily and a Nutella-covered waffle in a one-hour span. Dillon Hall’s Milkshake Mass is especially well-attended on campus, as you might imagine. In addition to the 60+ weekly mass opportunities that this adds up to between all the dorms, there’s also formal mass in the Basilica at a variety of different times. In the past three years, I’ve been to mass in my pajamas and in my Easter best, at times ranging from 9AM to 11PM. 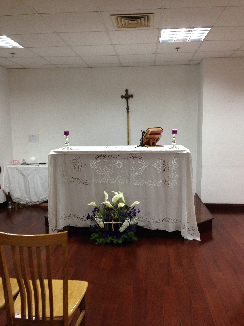 China’s church situation is a little different. Catholicism is recognized and legal in China, but there are definite restrictions on all varieties of faith celebrations. All churches are approved and surveilled by the government, and there is also a legal element in the selection of who can serve as a priest. This means that some practicing priests are not recognized by the Vatican, and some priests recognized by the Vatican are barred from practicing in China. In response, illegal “house churches” are a not uncommon occurrence, where mass will be held by a priest in a private residence.

I and another ND student, Andrew, have been doing our best to attend mass every Sunday at a place named St. Ignatius Cathedral, which has English mass once a week. We’ve set a goal to attend Chinese mass at least once during our time here, which I’ve done several times in Beijing previously and always found it to be an interesting experience. The main part of the cathedral hosts what I assume is a Chinese mass, as English mass is held in a smaller and simpler room upstairs. There are definitely several moments during the mass that I remember I’m in China, such as when the priest’s homily includes characteristically Chinese viewpoints (“Lent is good for the body, fasting will make you lose weight!”), or when I reach out to shake a stranger’s hand and am met with a bow instead. There’s also a jaunty “Shalom, my friends!” song that is sung after exchanging peace that challenges me to contain my giggles. The entire experience manages to be peaceful, interesting, and grounding at the same time. 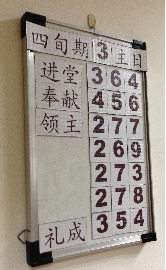 While getting to mass in Shanghai is not as convenient as walking downstairs to Ryan Hall’s chapel in my pajamas, I’m glad that I’ve been taking the opportunity to go. I’m thankful that I live in a country where not only my religion, but all religions, are allowed to practice freely. Also, if anyone has recommendations for where to get a good post-mass waffle in Shanghai, please let me know!