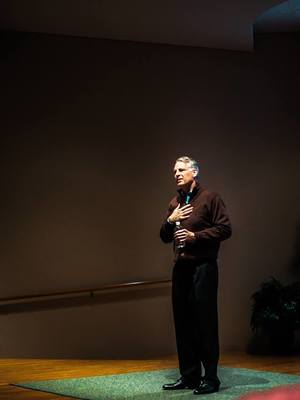 Last Friday, Tim Roemer, former Ambassador of the U.S. to India, and member of the House of Representatives from Indiana’s 3rd district, came to speak to members of the Hesburgh-Yusko Scholars Program about modern day civility.

Mr. Roemer had several points that I felt stood out and were applicable to this generation of young people. Firstly, he stressed that civility was not about compromising, or dictating what your principles are. Rather, civility is the ability to stand by your values, and it forces you to reckon with the merits of the ideas of your opponents. Civility, in Mr. Roemer’s opinion, resets the terms of debate to more substantive grounds, and this allows for substantive decisions, and as a result-substantive government. If we learn to treat our opponents with a measure of respect and accept that they might have good ideas, civility can become more than just a moral good, it can be an essential element of a democracy’s health and can eventually lead to transformational changes.

His second point, was that civility was not necessarily a sign of weakness, but rather a mark of true leadership. He then gave examples from history, pointing out leaders of our country like Abraham Lincoln, and Ulysses S. Grant, who showed civility towards the Confederate opposition during the Civil War. Martin Luther King showed true civility through his nonviolent resistance during the Civil Rights Movement. Mr. Roemer also mentioned Malala Yousafzai, whose life has been dedicated towards education for women and girls, a result of her civility in the face of oppression by the Taliban that almost took her life.

Lastly, Mr. Roemer explained that civility also had a relevance to our life as students. The media in itself is like a “digital public square” and people are verbally attacked 24/7 whether behind a keyboard on Facebook or Twitter, or on Fox News or MSNBC. However, Mr. Roemer has hope that our generation is the “engine of social culture” and that civility is not something that is uniquely an American problem. Given the diversity in political, socioeconomic, and cultural backgrounds here in his country and in the world, he has hope that by being accepting and open to different ideas from different people, we can truly become empowered and can show civility as leaders in our own ways. As young people we should not be discouraged from voicing our opinions, but rather we should embrace everyone’s different points of view, while holding our own moral convictions. It is our duty going forward to make this “public square” a more welcoming place.

I believe as Notre Dame students, who have been blessed to come to such an outstanding academic institution with such strong moral and Catholic convictions, it is our responsibility and duty to practice civility in our university, with our peers, with our own communities, and eventually with the world.