By emphasizing a curriculum based on classical architecture, the University of Notre Dame School of Architecture already distinguishes itself from hundreds of other architecture programs in the country.  According to the official Notre Dame School of Architecture webpage, its mission is to “educate leaders who will design and build for future generations, cities and towns that are based on a foundation of conservation and investment rather than consumption and waste.”  In order to achieve this mission, it is critical to learn from past generations and preserve examples of good architecture for future generations.

DHARMA, or “Digital Historic Architectural Research and Material Analysis,” makes it their mission to document various cultural heritage sites around the world.  Backed by a small team of researchers and student assistants, Krupali Krusche, Notre Dame School of Architecture Professor, currently leads the project, which was founded in 2007. 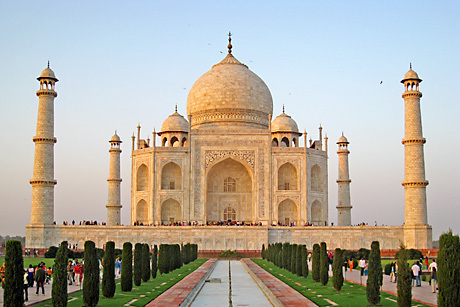 By using a Leica 3D laser scanner, the team is able to most accurately record buildings such as the Taj Mahal in India and the Roman Forum in Italy.  After the scans are taken, they are stored with the help of CyArk, a non-profit organization, and then shared freely with the world.  DHARMA’s goal is to continue documenting other ancient endangered UNESCO cultural heritage sites, which have yet to be documented in detail.  Thanks to a special agreement between the University of Notre Dame and UNESCO, the team will have private access to these historical places to promote cooperative preservation.  This is quite the honor, as UNESCO only shares eleven similar agreements with other universities.

“Going into this school year, I knew that I wanted to enter into scholarship after graduation. If it was up to me, I’d be in school the rest of my life. I love to learn, and the more I learn, the more curious I am about the world. Under Prof. Krusche, DHARMA has fulfilled that curiosity for now. It’s been the greatest experience in preparation for a career in academia, providing me with invaluable resources and experiences working at world heritage sites like the Taj Mahal and the Roman Forum. It’s given me a more complete understanding of architectural world heritage, especially its congruencies and complexities. Most importantly, it’s sophisticated my understanding of the impact architectural character and design in general has on cultures and people.”

Although the details of the project remain in confidentiality, DHARMA is currently focusing its efforts on the documentation of the Taj Mahal.