The School of Architecture varies from other college paths in many ways, but one major way it differs is how an architecture student approaches finals week. Finals week is typically the last week of school before the end of the semester where there’s no class, a lot of studying and writing, and a lot of exams. However, my finals week starts as soon as Thanksgiving is over. A lot happens in the last three weeks of school in the architecture building. We all have a studio class that accounts for about a third of our credits each semester. There’s no final exam for this course, but rather a final design project that always inevitably takes up every waking hour of our lives for about the week before it’s deadline. We work until 9pm the day it’s due and then complete what’s called a “review” where we present our designs and receive constructive criticism from a panel of professors. But, as hectic and time consuming as this is, that entire class is completed for the semester before normal finals even start. This totally opened my finals schedule and allowed me to focus on just two classes. Below is my finals calendar for this past fall 2018 that includes the three weeks of school between coming back to campus in November after Thanksgiving break and leaving for Christmas break.

As I approached actual finals week, I found myself with a strange amount of unallocated time in comparison to deadline week where every literal waking hour was spent working in studio. And since two of my classes were already completely finished, (my building technology class also finished the week prior,) I only had three classes to focus on instead of five. I’ve learned since coming to college that a day is far more productive if it’s full of things to do. A busy day becomes so well structured that I work more efficiently. A day left completely to my own devices tends to lead to sitting on the couch binge-watching Netflix. (whoops!) In order to combat this and finish finals strong, I 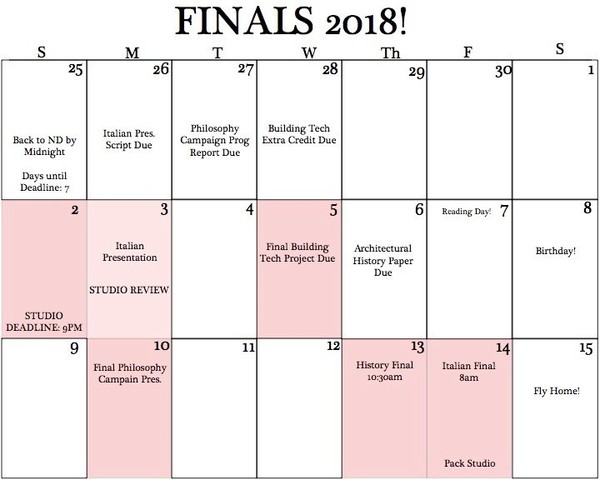 Overall, finals week for me involved a lot a rest and rehabilitation from deadline week and self-structuring to finish strong. This is by no means a typical finals schedule, but I’ve learned to appreciate my unique academic experience.purposefully scheduled every hour of my finals week. If I have some idea of what I should be doing, (whether I stick to it perfectly or not) I work a thousand times better. I let Sunday involve organization and preparation for the week and thoroughly I also planned out my meals with friends, so I knew exactly when to take a break, and since I had so few classes on which to focus, I also stopped working at 10pm every night to decompress and get good sleep. (As simple as it may seem, sleep is something I’ve learned to genuine cherish because deadline week tends to be merciless on the sleep schedule.)