I’m nervous. I have no friends. There’s no way I can keep up with everybody else.

These were the thoughts that ran through my head on the days leading up to college. Everything around me was changing so quickly. I didn’t quite understand how to respond to the rapid change in lifestyle that would follow my departure from California. It felt like I was being reborn into a new life.

As move-in day drew nearer and nearer, I became more and more anxious. 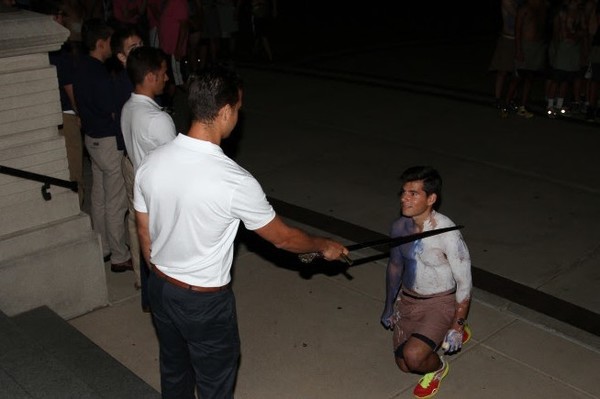 Then, the day finally came. I said goodbye to my family, as all of my clothes and supplies were hoisted up to the fourth floor of Keenan Hall, the dorm that was fatefully chosen to be my new home. I had no idea what to expect. My heart was pounding with both uncertainty and excitement.

Things started out strong. I met my roommate and familiarized myself with the resident advisor on my floor. Although it felt strange to act completely free of parental intervention, I went with it, and let the magic of Notre Dame drift me away. It was a scary thought to live so far away from home, but I figured it was bound to happen eventually. I still felt a bit uneasy being around complete strangers; but unless I decided to throw away my education, these “strangers” were here to stay.

Suddenly, everything just… clicked. I wasn’t the only one going through the inquisitive process of trying to find my place. Everyone else was on the same boat. We all didn’t know each other, and didn’t know where we fit into this new, unfamiliar society. Everything was so foreign. And that’s how friendships were born.

Notre Dame has this uncanny way of bringing together people from all different walks of life. Varsity athletes, theatre stars, chess champions – we were all unified in our diversity. We all had something cool or interesting to bring to the table. It was oddly gratifying to talk about our home states, how our weather situations were all drastically different, and how we couldn’t wait for football season to start. There were no cliques, no pressure, and no shame in being ourselves. Everyone simply belonged.

It was not long before I found community in my fellow Knights. We began our journey as Squires by attempting to find our way around Keenan’s rich culture and tradition. As freshman, we didn’t exactly know what it meant to be a Knight. After three days of running through the campus, chanting familiar songs and incantations, and serenading several ladies’ dorms, we were knighted at the foot of the steps to the Golden Dome.

It became apparent. Being a Knight isn’t simply about being a resident of Keenan Hall. It is about being strong, chivalrous, and able to adapt to the ever-changing world around us. It is an identity that we are to live by – not just to use as a label. To be a Knight is to take Notre Dame’s mission, and fight for it with firm resolution. It is to fight alongside all people, both men and women, in the war for human dignity. It is to live in unity with Christ and His teachings. It is to be kind to all fellow men, whether or not they bear the Keenan name.

While my experience may not be representative of all, it just shows how community plays an integral part of what Notre Dame is all about. No matter where you may be on campus, there will always be someone who would reach out at a moment’s notice. Notre Dame isn’t just a college. It’s a family. It’s a way of life. It’s a haven for those who simply want to figure out who they are. If there’s anything I’ve learned from living in Keenan, it is that we are Fratres in Christo. We are Brothers in Christ.