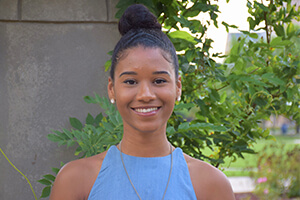 As a first-year Notre Dame student Qai Gordon ‘18 knew she wanted to enter the Mendoza College of Business, but it wasn’t until she took a required Introduction to Information Technology course that she really honed in on her interest in computer systems. Now a senior, Gordon will graduate with a degree in Information Technology (IT) management and she’s honest about the decision-making process that has led her there.

“I was completely against IT for my first year of college, simply because I thought it only consisted of people sitting in front of computers all day. When I realized how wrong I was, I had a change of heart and then remembered that I actually do like the technicality of computers and computer systems,” says Gordon.

The Nashville, Tennessee native loves being able to decipher complicated systems. Plus, she gets the business background she’s always wanted. Students in the IT management major learn about the development and use of information systems as decision-making and problem-solving tools. They also gain an understanding of the managerial issues encountered in the operation or introduction of information systems in organizations.

“IT management is different from computer science because it's more centered on business and how IT and business collide and complement one another, which was perfect for my interests,” says Gordon.

Gordon’s other interests center on diversity. She’s president of the Black Student Association (BSA) at Notre Dame and is involved in other clubs including the Voices of Faith Gospel Choir and Shades of Ebony, an organization geared toward black women on campus. Shades of Ebony meets weekly to discuss various topics in relation to the black and female perspective and they also mentor middle and high school girls in the South Bend area. 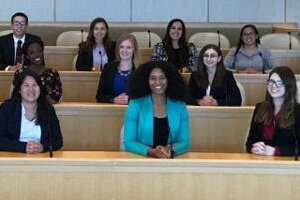 “Organizations like these that bring people together from similar backgrounds are important because they build community between such people and are available as a sense of comfort, as well as a medium to meet others in the Notre Dame community.” says Gordon. The Voices of Faith Gospel Choir has been especially important to Gordon, who is Christian but not Catholic, providing her with a community of students with similar beliefs.

After her first year at Notre Dame, Gordon attended a JumpStart Undergraduate Diversity Forum with some fellow students. JumpStart is a targeted pre-matriculation forum through which consulting and financial services firms can identify, educate, and recruit diverse talent at top MBA programs. There, Gordon met and stayed in contact with a recruiter from Wellington Management Company in Boston. In her junior year, she applied to Wellington’s summer internship program and was accepted. She spent ten weeks living in Boston and working as an IT analyst on the company’s Trading Operations team.

“During my internship, I had so much to learn about the company, the industry, the team, and the technology in a short amount of time, but my team and all of the people I met were extremely helpful in teaching me so much of what I needed to know,” says Gordon. 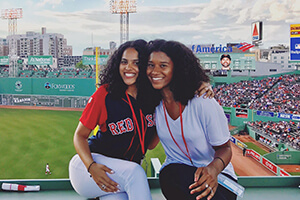 Throughout the internship, she gained work experience and made connections that, along with her dedication and work ethic, turned into an offer for a full-time position. Gordon will be returning to Wellington to work as a full-time IT analyst after graduation. It’s a career path she hadn’t entirely anticipated when she came to Notre Dame as a first-year student. “I wasn't sure of my major until the end of sophomore year. After I took the mandatory Introduction to IT class, I realized my interest in computers and the potential future I could have with an IT background.”

Explore IT Management and other majors offered at the Mendoza College of Business.