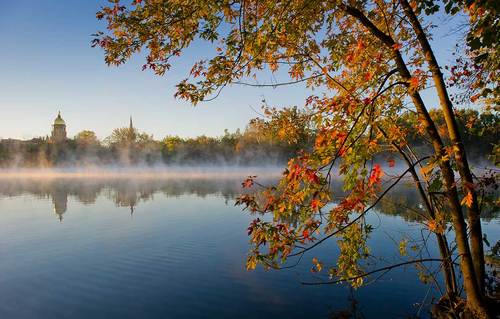 My senior year of high school I was convinced I wanted to be, very specifically, a biological engineer. I was ridiculously ambitious (as most Notre Dame prospective students are!), so therefore I was scouring the rankings websites to see which undergraduate programs rated the highest for this particular major. As it turns out, a popular, yet competitive school in my home state topped the charts and also ranked very highly for it’s overall undergraduate engineering program.

Here was my dilemma, though numbers and rankings aside, I felt disconnected from the school itself. Even as several of my best friends from high school left their tours feeling confident in their decisions to attend that university, I didn’t feel at home. Except for the standout undergraduate engineering program, I didn’t see other areas where I could flourish as a student, but most importantly just as a person. I wanted to be a top engineer, but in a sense, I wanted to be much more than my career and felt as though choosing a school based on the rankings of a major led me down a very narrow tunnel.

So, why did I choose ND?

I think somewhere along the way, I had just met all the right Notre Dame alums. Whether that be my high school Spanish teacher or the former Governor of Indiana, they all seemed to have a certain quality about them that I admired and hoped to have in my own life. It’s hard to explain what I mean by this ‘quality’ but in a general sense, they seemed to be the most honest and good of people that also found ways to live highly fulfilling lives. I ultimately chose Notre Dame because I wanted to focus on who I wanted to be instead of what I wanted to do.

In the end, this turned out to be the best decision, because what I wanted to do has changed multiple times throughout the course of my college career (Read: Journey through my major) and will continue to change in my professional career. In any major path I could've chosen, I feel confident Notre Dame would’ve prepared me academically. Therefore, I’m happy I chose to attend a school for a much broader reason than the major I thought I wanted as a senior in high school.