I’ve had multiple incidents this week that I could classify as “learning experiences.” The best I can do is flip them into advice for my future self or anyone else who might find them useful! 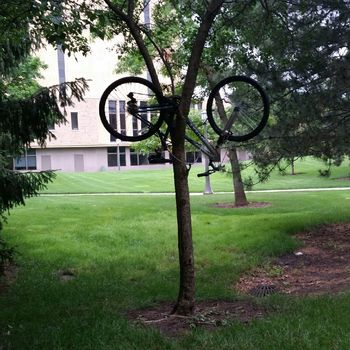 I had to be at work early on Saturday morning, so I plugged my phone into the wall and set my alarm like I usually do. Well, this time my charger finally quit on me, and I woke up to a dead phone. Luckily, I still woke up relatively early (I had to skip breakfast :/) and was only a few minutes late to work. I’ll keep this in mind next time I have exams and set an alarm on both my Mac and phone. Also, having a friend make sure that you’re up for an exam will ensure that you both have a solid plan, too.

2.     Lock your bike to something, especially overnight.

The day before, I had left my bike at LaFun  (LaFortune Student Center) and put the U-Lock on the back tire since all of the bike spots on the rack were taken. This is usually okay if you’re just running in and out, because no one is going to be able to steal your bike unless they carry it away. Also, the U-Lock can’t be cut like some of the cord locks can. My problem was leaving it there overnight (a Friday night), waking up, and not being able to find it. I knew right away that I had to start looking up in the trees - and that’s exactly where I found it. This happened the same morning that my USB cord stopped working (no joke), which just added to the stress of the morning. Thank goodness it wasn’t up very high, and I was able to get it down!

So U-Lock your bike to something or else someone will put it in a tree.

3.     On the school’s computers, pay attention to where you’re saving files.

For an assignment, I needed an Excel add-on that I didn’t have on my computer, so I used an ND computer. The homework took me about an hour to complete, which isn’t bad, but then I didn’t save it to my personal N: drive. It’s gone. I’ve been here for 2+ years, and I still forget to save files to my drive. Next time, though, I got it.

A lot of students live off-campus by their senior year, and my roommate and I are finally getting ready to sign a lease (we’re even kind of late on the ball for renting 2015-2016). Anyways, we visited the house we initially wanted to look at, but it ended up being nothing like the pictures (and it sorta smelled…). The student manager then offered to show us another house, but we weren’t interested based on the photos we’d seen of it online (it didn’t seem charming, you know?). We only decided to take a look when he said it was just down the street. When we actually saw it, we liked it better than anything else and are now getting ready to sign the lease soon. Moral of the story: check out all of your options! Besides houses, there are plenty of apartment complexes and townhouses in the area - some of them just for students!