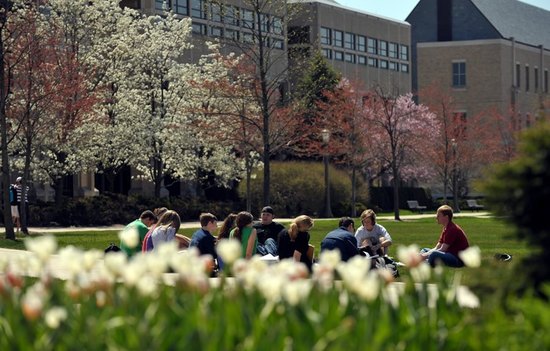 It starts with engineering.

Specifically, chemical engineering - I think I just Googled "what is the hardest undergraduate major" and picked it. I spent most of high school proving that I could keep up with any and all Honors/AP classes offered, and I came in with that same mind-set here, too – I just had something to prove. I never even thought to ask, “what would I actually want to do?”

As you can guess from the title of this, chemical engineering is not my major today. First semester was all good and great until I found myself in the emergency room a few days before finals. Okay, that was dramatic – I was in the emergency room, but only because I needed X-Rays and other facilities weren’t open at night. I’d been playing basketball at Rolf’s and took an odd turn, feeling something pop in my knee. The X-Ray didn’t show anything, so I spent the next few days at doctor’s appointments and an MRI appointment to confirm that I’d completely blown out my knee. Being an avid procrastinator, I had been waiting for these last few  “reading days” to wrap up my studying and projects for finals week. Not only was I completely unprepared for finals, but I was emotionally distraught over the upcoming surgery, recovery (6 months of physical therapy, yay!), and the lifelong implications of my injury. I started finals week by winging a presentation while sitting in a wheel chair with a full leg brace and being on heavy painkillers – my other finals didn’t go so well either. At the time, this was traumatizing, because I was failing my finals and couldn’t control anything about it. In retrospect, though, this was probably the best thing that ever happened to me.

Doing poorly on my finals made me realize that I only liked what I was studying because I was succeeding at it - I’d done consistently well throughout the semester (luckily this allowed me to still have good grades in the end). For the first time, though, I didn’t have my perfect GPA and didn’t even want to do engineering if I didn’t have the most competitive grades. I know - it seems ridiculous, but it was quite a realization at the time.

So where to go from here? I remember sitting in my dorm room searching through the different colleges' websites. I found myself on the philosophy department’s website because my favorite class first semester was, in fact, Introduction to Philosophy. What’s funny about this is that I came into the class asking myself “what is the point of philosophy?” and left it considering philosophy as a major. Quite a drastic change: engineering to philosophy.

Second semester, I decided on the Mendoza College of Business, thinking that I had a strong interest in marketing. I didn’t have a good DART scheduling time, so I was very limited in what freshman seminars I could take. I ultimately chose one on Chinese Poetry because I remembered going to Epcot in high school and liking the China exhibit/area. While taking the class, my interest grew, and I discovered that there was a summer study abroad in China, which I applied for because… why not? Since dropping engineering, I had no set direction; therefore nothing I did needed to comply with my “life plan.” I was simply pursuing interests and not trying to make interests fit around my predesigned blueprint for success. The study abroad organizers printed us business cards for our trip and asked for our majors. At this time, I wrote down: Marketing & Philosophy.

Sophomore year, my Business Ethics professor mentioned a new institute at Notre Dame called the Liu Institute for Asia and Asian Studies. She said that they offered a minor and supplementary major in Asian Studies. I almost brushed it off, but instead, decided to look into it once I realized that I’d taken a string of classes related to China (Chinese poetry, two over the summer in China, and I was also taking Chinese philosophy because, again… why not?). So, that’s my story from wandering around China in Epcot, to actually going to China, to finally becoming an Asian Studies major.

Now within Mendoza, despite initially thinking that I wanted to pursue marketing, I really had no clue what I wanted to pursue. In the spring of my sophomore year, the IT department came out with a Visual Communication Design (VCD) concentration that involved classes like Web Applications and 2D Foundations (which I’m in now). Growing up, I had spent hours upon hours on the computer creating websites and making graphics, all the while feeling bad and thinking I should be doing something more productive than “playing on the computer.” When I looked over the course descriptions, I realized that my hobby must actually be worth something if Notre Dame is offering classes on it. It’s really neat to think that I’m studying something that I often use to procrastinate for other things.

Here’s where I’m at now: IT Management with a VCD concentration and a supplementary major in Asian Studies. I’m really excited about what I’m doing now and sometimes wonder what would have happened had I never had that knee injury. I'd like to think that I'd have eventually come to my senses and realized that engineering wasn’t for me.

So, this little story is how I, as an ND student, stumbled into my major and let my experiences and interests ultimately shape my future plans. Finally, I’ll leave you with this quote by Steve Jobs, as it has greatly applied to my course of study and maybe even someday, my life: