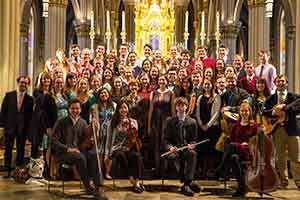 The Folk Choir inside the Basilica of the Sacred Heart

Senior Jim Corcoran auditioned for the Folk Choir as a sophomore because, he says, “I wanted to be in a choir whose music existed to serve the people of God, a group whose music allowed the Church to sing.”

If you’ve ever been to the 11:45 a.m. Mass at the Basilica, you know what he means. The Folk Choir is one of Notre Dame’s principal liturgical choirs, primarily serving the University by singing at the 11:45 Mass on Sundays during the academic year.

More than four dozen men and women from every college and major sing in the choir, often accompanied by a variety of instruments, including flute, organ, violins, guitar, string bass, Celtic harp, cello, and the bodhran (Irish drum). Many of the musical selections are exclusive to the Folk Choir, having been arranged by the directors. The choir also features songs from around the world, including those from Ireland, France, and Mexico, and even selections in Russian and Mandarin Chinese. That’s just a small sampling. The choir focuses on contemporary sacred music sung almost entirely in four-part harmonies.

Prayer is the Point 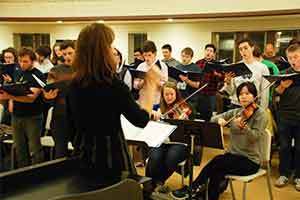 The choir’s musical acumen has garnered international recognition, including invitations to sing for World Youth Day in Denver, Colorado, and for His Holiness John Paul II at the concluding Papal Liturgy. But the spirituality of the group makes the Folk Choir a cherished ND tradition.

Truly a University ministry, the focus is on prayer and praise. Members make prayer a part of everything they do, from rehearsals to service projects, and that results in a community of musicians who truly care about one another and the people they serve.

"Being a member of the Notre Dame Folk Choir is an ‘epic’ experience,” says Interim Director Karen Schneider Kirner. “I can think of no better way for students to express their faith and spirituality in a joyous and loving faith community here at the University of Notre Dame. Members are together a minimum of six hours a week for rehearsals and Masses, so we see a lot of each other!”

Activities outside of that schedule include shared meal times in the Dining Hall, service projects, social activities, and visits to prisons and homeless shelters. Each fall, the choir offers a Concert for the Missions, an evening concert following a home football game to benefit the educational, peacebuilding, medical, and religious efforts of the Holy Cross Missions throughout the world.

Have Faith, Will Travel 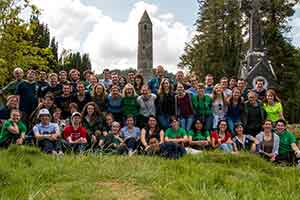 The Folk Choir in Glendalough, County Wicklow, Ireland, May 2016

The choir also tours extensively as part of their ministry. There are condensed mini-tours during breaks in the academic year as well as international trips.

As a liturgical choir, the Folk Choir “exist(s) to inspire the song of the assembly, and aid in their prayer and joyful expression” and tours are seen as pilgrimages from one faith community to another, just as many pilgrims come to the University of Notre Dame every year, to be inspired in their faith. “Our focus is on finding new music for the church that can engage not only young adults, but spark participation of the person in the pew,” says Schneider Kirner.

Throughout his tenure, Jim Corcoran, who is student president of the Folk Choir, has been to Scotland and Ireland. “We sang in Edinburgh, did a retreat in the Scottish Highlands, sang in Belfast in Northern Ireland, Tulla, Cork, Wexford, and Dublin. On our last day, we were hosted by former Irish president, Mary McAleese, in her hometown of Rostrevor to sing at a choral festival. The whole trip was an amazing experience.”

In the spring of 2015, the Folk Choir toured western Australia for two weeks, visiting Melbourne, Sydney, Strathfield, and Brisbane. A tour of the US Heartland is scheduled for May 2017. It includes stops in Indiana, Kansas, Missouri, and Nebraska. 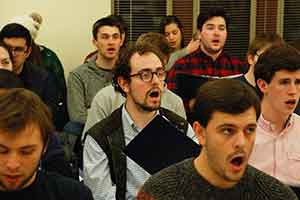 Jim Corcoran, center, is the student president of the Folk Choir.

When asked what he values most about the Folk Choir, Corcoran says, “I love how the choir is loving. The music is beautiful because the people in the choir love each other. We eat together, pray together, spend time together outside the group. There’s a real sense that all people are valued, essential, and loved.” This is a feeling that continues beyond graduation. Folk Choir alumni stay in touch with their directors and each other, often returning to campus for Folk Choir events.

For incoming first-year students, the Folk Choir is one way to “find your place” on campus. If selected after auditioning, you’ll be joining a built-in community. “I'd highly recommend auditioning for anyone coming to Notre Dame with a passion for both music and our Catholic faith, who would enjoy being a cultural ambassador for our University," says Schneider Kirner.

If you are an incoming first-year student who would like to audition for a spot in the Folk Choir, please contact Interim Director Karen Schneider Kirner directly via email.

Learn more about the auditioning process.