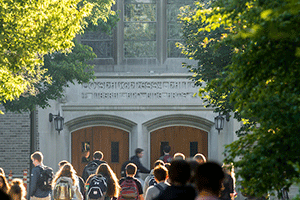 This August, 2,052 first-year students arrived on campus. Marked by their academic achievements and dedication to service, the Class of 2021 brings a variety of talents and academic interests to Notre Dame and an uncommon sense of balance in the students' exceptional ambition and desire to be of service to others.

Chosen from a pool of 19,566 applicants, the enrolling students were admitted through the University’s holistic selection process, which is focused on their records of achievement and significant attributes revealed through essays, letters of recommendation, and extensive discussions of activities, along with the students’ motivation for their success.

The Class of 2021 is the most nationally and globally diverse student body in Notre Dame history. The average student traveled over 750 miles to begin his or her Notre Dame career. In addition, the first-year class attended 1,315 different high schools, hold 46 different national citizenships, and speak 57 languages.

Geographically, 38 percent of the students are from the East and South, 34 percent are from the Midwest, and 27 percent are from the West or outside of the U.S. The New York City area is the largest metro area represented in the freshman class followed by Chicago, Los Angeles, Washington D.C., Minneapolis, Boston, Philadelphia, Indianapolis, Detroit, Miami, Cleveland, San Francisco, Beijing, Atlanta, Dallas, Pittsburgh, Cincinnati, New Orleans, St. Louis, and Seattle.

Don Bishop, associate vice president of undergraduate enrollment says, “The students are truly remarkable in their motivation for scholarship and learning as well as their commitment to servant leadership. The enrolling class is comprised of students with compelling achievements and special talents with the potential to become tremendous scholars, researchers, creative artists, corporate and political/community leaders, and entrepreneurs.”

Among their ranks are: a New York Times best-selling author, who is also an accomplished motivational speaker, finding the time to visit over 200 schools to present to children; an Indian national champion in debate and member of her nation’s World Robot Olympiad team; a U.S. Paralympic athlete, a silver medalist in Rio who won a World Championship in Qatar and was adopted by the Notre Dame football team in 2012 while he was battling cancer; a student who has advanced cerebral palsy and has created a national blog that has over 500 posts each day; a classics intent that founded a nonprofit to teach Latin at the Detroit Public Library to inner city students and has also conducted research at the Henry Ford Hospital and co-authored a paper for the American Academy of Neurology; a 2016 Intel International Science and Engineering Fair fourth place Grand Award winner, who also won the silver medal at the international 2016 Genius Olympiad out of over 1000 projects submitted; a student who built his own computer to conduct now published research that led to presenting the biological links between ALS and AIDS at an international conference in Venice; a student from Jamaica who, prior to being on his national waterpolo team, was the 2013 World Tour Champion in karting.

“We have sought and enrolled students who are reflective thinkers interested in using and developing their talents to seek a greater understanding and sense of care for themselves and others,” Bishop adds. “During their Notre Dame years, we will guide our students toward a deeper personal development leading them towards a greater sense of wisdom.”

The applicant pool and the enrolling class set new records for selectivity. The number of applications with academic accomplishments was higher than any previous year. More than 70 percent of the incoming class had a national test score or high school performance that the admissions office rated as being in the top one percent of the nation. Only about one-third of students with these level of academic accomplishments gained admission.

Some highly accomplished students not in the top one percent were valued above students with higher numbers. The students’ motivation for success, creativity, entrepreneurial spirit, leadership talents, record of service to others, self-awareness, and kindness, as demonstrated in their applications, were even more of a consideration than any other year.

Notre Dame students are also continuing an upward trend in diversity. In comparison with the nation’s top 20 most selective private research universities, over the past two years, Notre Dame ranks among the top 10 for the number of enrolling Pell recipients.

The University in the past few years continues to rank among the top five (of the top 20) in the percentage of enrolled students receiving a University funded scholarship (54 percent).

Notre Dame also set a new record in the combined number of African-American, Hispanic, and international student enrollments. Among the nation’s top 20 private research universities, Notre Dame likely ranks in the top five for the number of enrolling Hispanic and African-American first-year students.

“The University has a distinctive mission, unlike any of the other most selective top 15 national research universities,” says Bishop. “It’s our job in admissions to find the students that will make the most use of all the resources that are at Notre Dame: balancing the academic and social development aspects of Notre Dame and then becoming a force for good in the world.”