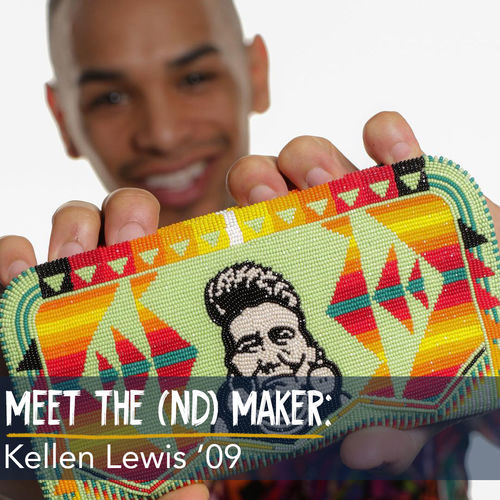 Alumnus Kellen Lewis’ heritage is important to him. So important that he’s turned a traditional Native American art form, beadwork, into a meditation on contemporary pop culture. His artwork, hundreds or thousands of tiny beads worked into the likenesses of Barack and Michelle Obama, Beyoncé, and the House Stark direwolf from the Game of Thrones TV series, stems from the Nez Perce tradition.

Lewis is a member of the Nez Perce Tribe and his work also features traditional themes and articles, including one of his favorites, Appaloosa horses, a significant symbol for the tribe.

Lewis is a self-taught artist, but his work is inspired by someone very special to him, his uncle, Dr. Arthur Maxwell Taylor Jr., who grew up on the Nez Perce reservation, was a tribal leader,  and was assistant director of Multicultural Student Programs and Services at Notre Dame from 2002-2007.

In fact, it was his uncle who nudged Lewis to apply to Notre Dame as a high school senior. Coming from Seattle and being the first in his family to attend a highly-selective University, Lewis says he felt a bit lost among the driven and academically-oriented students in his high school classes.

“...[M]y senior year of high school...I didn't feel empowered. I didn't feel worthy, especially when comparing myself to a lot of my classmates. And although I did excel academically, I spent much of my time focusing on other interests, rather than putting more effort into my college search and planning,” says Lewis.

But Lewis’ uncle convinced him to apply. “And once I got in, it changed my life,” he says.

While Lewis was born in Seattle and attended high school in Spokane, he feels he comes from humble roots. His mother comes from the Nez Perce Indian Reservation in Idaho, where his family still resides today. His Notre Dame education was one turning point that opened him up to new experiences.

Lewis majored in anthropology and minored in Portuguese and Brazilian Studies. He studied abroad in Brazil, spending nine months focused on learning Portuguese. He also traveled to Mexico and says his travels with Notre Dame programs, his academic success, his job with the Office of Undergraduate Admissions, and the community of friends he became a part of here, boosted his confidence immeasurably.

“I questioned myself even coming here,” says Lewis. “I didn't apply to schools that were at this level because I didn't feel that I was good enough. Ultimately, I ended up coming here and conquering the experience. I was able to create great connections and become super involved in the community and the culture around campus.” 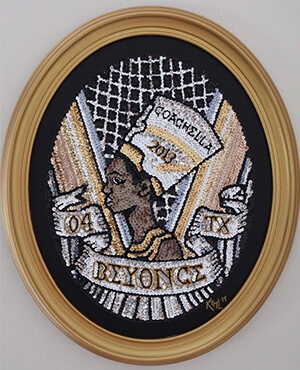 While at Notre Dame, Lewis organized and participated in student performances and other activities and also found a job he loved. “I became more secure in myself and my contributions in classes both on campus and abroad,” he says. “More than anything, I enjoyed the opportunity to spend three years working in the Office of Undergraduate Admissions as a multicultural student coordinator, helping other diversity students find their way to this school, just as I had.”

It takes Lewis anywhere from 20-25 hours to create a single beaded medallion. He clocks over 350 hours of work for the traditional beaded regalia created for his tribe’s horses. The hours he puts into his beadwork are a reflection of his dedication to his heritage. He recalls seeing a beadwork bag hanging on his uncle’s wall as a Notre Dame student and thinking “[O]h, I want to bead that well one day.”

Lewis started practicing cultural arts primarily with traditional Nez Perce corn husk weaving and worked his way into beadwork. “I started that adventure intentionally, here on campus in Knott Hall, on the second floor. In my single.”

He was a true beginner, creating rudimentary works that, after ten years of repetition, study, and practice, helped him develop a mastery of the artform.

“I have come to deeply appreciate the history, vocabulary, and muscle memory involved in the arts of my people. There is a profundity to it all that is absolutely amazing,” says Lewis. “I grew up surrounded by heirlooms with direct connections to my Nez Perce ancestors. I learned the stories connected to their legacies. And while I created throughout my childhood and high school years, it wasn’t until the end of my time at ND that I honed in on the goal of continuing my family’s legacy by contributing to our archive of traditional items through my artwork.”

The pieces he carries now and shows around the world are all inspired by Lewis’ exposure to Nez Perce arts when he was younger.

Now, Lewis lives in New York City, where he practices his art, in addition to expressing himself through another passion: fitness. He teaches spin classes and was recently certified in Buti yoga, an asana (posture) practice paired with primal movement, tribal dance, and core engagement.

He also works as a professional dancer and has danced, at different times, in music videos, for DisneyLand, for Universal Studios, and on a two-year global tour with Taiwanese pop star “a Mei.”

While Lewis enjoys exploring all creative outlets open to him, he’s most interested in living true to his heritage. 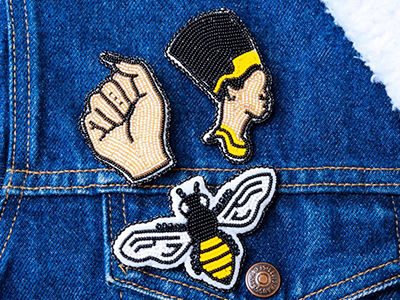 “I've always known that I want to empower my family and my tribe first and foremost. I’ve worked  to maximize on my gifts and natural strengths, knowing I have the support to push me through,” he says. “I take no credit for the traditional skills I get to utilize, as all the knowledge has been passed down for many generations. I feel a great responsibility to make the most out of the tools given to me, understanding the sacrifices of my ancestors who were forced into combat to secure my very existence here today. It’s incredible recognizing the strength in all that inherited energy, yet also very scary, discovering what I can do in order to make a meaningful impact.”

Lewis’ Notre Dame education helped give him the confidence to carry out the work that is important to him. As a student, he especially learned to be self-sufficient.

“Among other things, the University taught me how to dedicate myself as a student and get things accomplished. I learned quickly that if I wanted to advance myself in anything, I really had to sit down and do the work myself,” says Lewis.

“In a general sense, my Notre Dame experience taught me how to be,” he adds. “It was great pursuing an incredible education and cultivating an amazing support system of friends.”

Lewis says he’s also blessed to come from a beautiful family that supports him because it's not easy being an artist, even when you see success. His family, his friends, his tribe, and his Notre Dame community provide a foundation from which he explores his life. They both ground him and give him wings.

“I feel fortunate that no matter what, I have such a beautiful safety net underneath me. And I can always jump.”