This fall approximately 2,015 members of Notre Dame’s newest class will be arriving on campus. They were selected from a record pool of 18,157 applicants. Academically, the median incoming first-year student is in the top one percent of the nation in either high school performance and/or on national testing and have exceptional records of leadership and service. 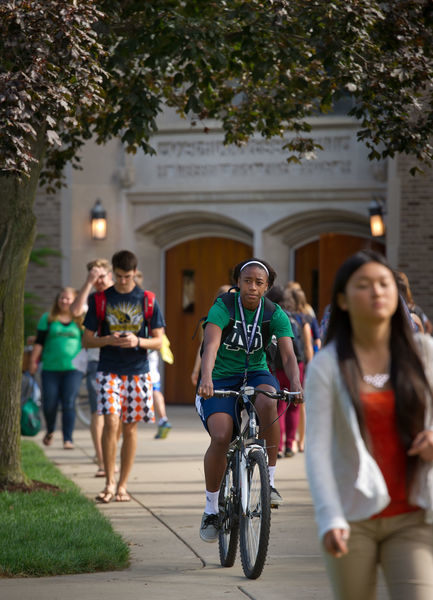 Don Bishop, associate vice president of undergraduate enrollment, notes, “This incoming class continues the trend of being more global and diverse than any previous year. Thirty-two percent of the new class will be U.S. students of color or international citizens and over eight percent will be the first in their family to attend college. The class is comprised of students representing 1,311 different high schools with the average student traveling over 750 miles to start their first year on campus. Notre Dame is arguably the most nationally representative university in the United States.”

Bob Mundy, director of admissions, commented, “This year’s yield rate, the number of students who will enroll after being admitted to Notre Dame, was fifty-six percent, which places Notre Dame among the top 10 private national research universities for yield success. Notre Dame continues to be an extremely popular choice - our students truly want to be here.”

The academic profile of the enrolled class continues to rate among the top 10 to 15 in the nation for national research universities. In the past five years, applications at Notre Dame have gone up twenty-five percent, and our applicants in the top one percent of the nation have gone up sixty-seven percent.

Notre Dame practices a holistic admission process that considers students for their exceptional academic and intellectual promise and creativity, as well as their leadership and entrepreneurial records and their heart and sense of service to others.

Notre Dame uses the national testing (SAT/ACT) less in its selection process, placing more emphasis on other attributes. The admit rate for applicants with a test score in the top one percent of the nation was eighty-one percent in 2010 and this year it was fifty-six percent. Additionally, 850 admitted students (565 enrolled) had test scores below the top two percent of the nation but were admitted due to their exceptional records of intellectual drive, leadership, service, entrepreneurial and/or creative talents.

Don Bishop, notes, “Notre Dame continues to search for the most dedicated and creative students who desire to make an impact in their eventual field of expertise, in their community, and on the world. We believe the best students for Notre Dame are highly intelligent but also possess a deeper capacity for reflection and ultimately the potential to develop a greater sense of perspective and wisdom. Our graduates crave more than just successful careers, they want to feel they are passionately living their lives with a strong sense of purpose and fulfillment.”