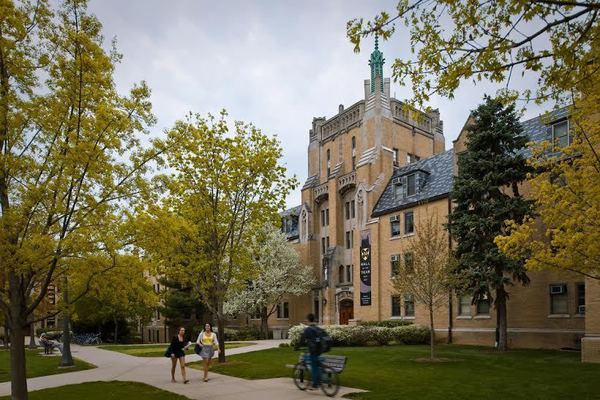 Hailing from County Kilkenny in Ireland, Andrew Morrissey would set sail for the New World after his twelfth birthday, inspired by the tales of his cousin Br. Bernard, a Holy Cross Brother serving at a blossoming institution in northern Indiana. His own priestly vocation would bear fruit at Notre Dame, where he excelled in his studies with humble determination. A true gentleman and scholar, Rev. Andrew Morrissey, C.S.C., would be called by none other than Rev. Edward Sorin, C.S.C., and Rev. Thomas E. Walsh, C.S.C., to lead his beloved Alma Mater as University President, a position in which he reinforced the college’s commitment to providing students with strong academics. "Our very existence depends on giving Catholic boys a good preparatory foundation!"
On Nov. 16, the men of Morrissey Manor, whose namesake “was thoroughly imbued with the progressive spirit of the institution and of its venerable and honored founder” as reported in Anderson & Cooley’s history of South Bend, celebrated the induction of a new Hall Fellow with a breakfast in South Dining Hall’s Oak Room. Considered to be honorary Manorites, selected faculty members are chosen “because of their distiguished teaching, scholarship, or service to the Notre Dame community and Morrissey Manor.” Dr. Martijn Cremers, a professor of Finance at the Mendoza College of Business, received the honor of 2014-2015 Hall Fellowship in recognition of his passion for faith and family.
“Many of our Hall Fellows have been prominent people on campus, and I think Manorites appreciate having a unique connection to an individual outside the hall, while still having an active role in the University,” Seamus Quilty, current Hall President of the Manor, said. “Many of our Hall Fellows have also offered unique perspectives based on their background, which I think also contributes to forming well-rounded student experiences at Notre Dame.”
Rev. Ronald M. Vierling, M.F.C., Rector of Morrissey, introduced Dr. Cremers at the breakfast, and explained the hallowed history of hall fellows, who at one point in time were unmarried professors living in the residence halls as a way to encourage the intellectual life of the dormitory. 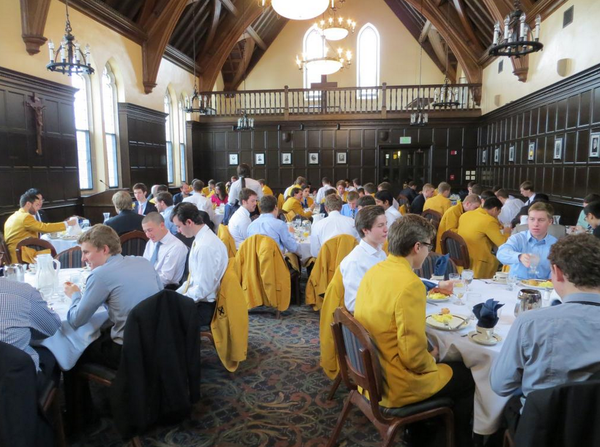 “The concept of the hall fellow plays the part of what we may call a ‘living logos:’ someone who by their life of scholarship and character, points to the values that we cherish,” Fr. Vierling said. “In Morrissey we summarize those values as ones of faith, brotherhood, scholarship, and service.”
The Manor’s fourfold approach to the Notre Dame experience informs hall community activities with a spirit of purpose and zeal. Morrissey men strive to balance school work with volunteer experiences, reflecting the fraternal charity embodied in the University’s particular pedagogical philosophy: education of both the mind and the heart.
“In a word, the goal of residential living at ND, one inspired by the Gospel, is to cultivate excellence of character, which is the moral worth of a man.”
Rustling his papers at the podium, Dr. Cremers addressed the gathering of students, offering a humorous anecdote about his unshaven appearance to begin his talk. During the summer, his sons had been reading the works of J. R. R. Tolkien and so asked him to look more like a hobbit. “My wife and my conscience said, ‘Martijn, you promised,’ and so that’s the story of my beard.”
Dr. Cremers reflected on the relation of character to business. He emphasized the importance of vocation, values, and virtues and used different parables to illustrate how to lead truly successful lives.
“I try to challenge what we mean by business,” Dr. Cremers said. “The language we use is reducing business to another marketplace.”
According to Morrissey’s newest Hall Fellow, the contemporary understanding of commerce is often lacking a human dimension, which recognizes the significance of moral growth and good relationships. Fulfilling genuine needs in lieu of merely generating profits should be the responsibility of workers.
“Freedom without responsibility is license,” Dr. Cremers observed. “Freedom with responsibility is true freedom.” 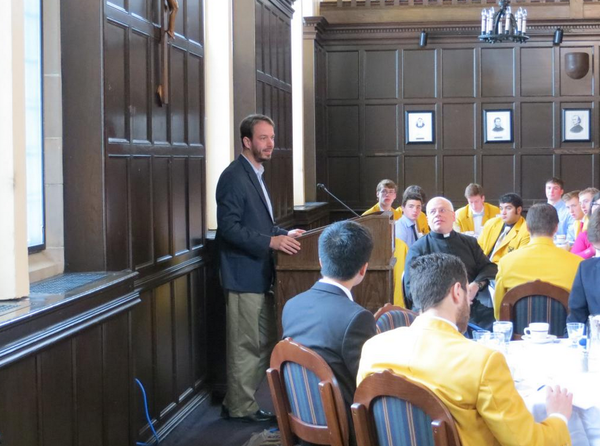 Although his research interests primarily focus on empirical issues in investments and corporate governance, Dr. Cremers maintains a healthy curiosity about theology. He says that he is always eager to receive recommendations for any interesting courses since he usually sits in on a class during the fall semester.
Despite my lack of a business background as a French and Philosophy double major, I still found Dr. Cremer’s arguments relevant to my own life as a ND student since they reminded me of the holistic objective of our current studies: the development of responsible citizenship and intellectual zeal. The Hall Fellows tradition at Morrissey is an excellent academic bridge between faculty and students.
“Much more importantly, [the Hall Fellows tradition] affirms and furthers the principles the dorm espouses by elevating a professor whose exemplary witness to a well-rounded, faith-centered and authentically truth-oriented lifestyle — especially in the context of their field of expertise — presents a model for students, to be emulated during and beyond their time at Notre Dame,” Scott Varian, a senior Architecture and French double major, said.