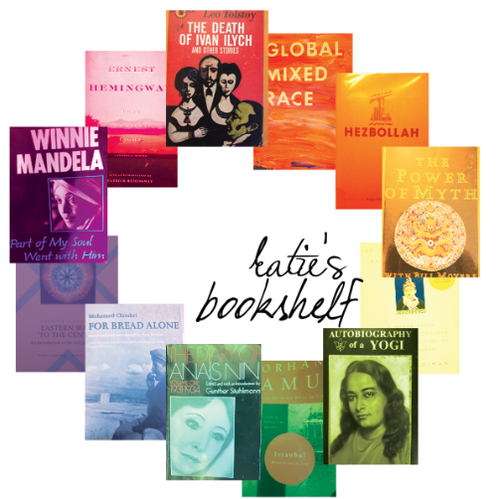 I can't remember the last time I bought a "new" version of a book. Almost all of the books on my shelf are ones that I bought for 50 cents or a dollar at Bargain Books in Mishawaka (10 minute drive from campus). They have a used book section, and there are always some cool reads to come across. That being said, most of what I read is happened upon by accident with the exception of two books on this list: Istanbul: Memories and the City by Orhan Pamuk and For Bread Alone by Mohamed Choukri.

Since I'm going to Morocco over winter break, I've been keeping up with Moroccan news and reading Moroccan blogs, following Moroccan instagram accounts, and just generally overdoing it. I figured that I better start getting into Moroccan literature, too, so I sought some advice over the internet and mustered up the $4.00 to order For Bread Alone from Amazon. It's a story about "human desperation" taking place in Morocco; the woman recommending it to me had this to say about it:

It is the book “For Bread Alone”, written by Mohamed Choukri (one of my favorite books of all time). You will learn a lot about the social and political situation of Morocco during the late 40s and early 50s. Almost every native in Morocco knows Choukri (even the illiterate) or has read something of him, so it will be highly appreciated that you know his work.

Also, I came across a Moroccan video blogger who mentioned that Istanbul: Memories and the City was her all-time favorite book. I thought I'd order this, too, since I'll be spending two days in Istanbul as well.

Global Mixed Race has multiple different chapters about histories between different countries and how this has affected the lives of people of mixed descent within those countries. I think I'm drawn to it mostly because I like learning about globalization that doesn't involve the U.S. And there's a chapter about Kazahkstan as well.

Hezbollah by Augustus Richard Norton is a book I picked up because I wanted more background on what's going on in the Middle East.

Autobiography of a Yogi is the book that Steve Jobs had handed out to the attendees of his memorial service following his death in 2011. He read it as a a teenager after returning from India and had read it every year since then. Because of this, I read about half of this on my Kindle two years ago. I wanted to figure out what drew Steve Jobs to a seemingly random book like this. I'm surprised to find it at Bargain Books again, but it must be a sign that I should finish it!

I've always found the quotes of Anais Nin to be interesting when I come across them on the internet, so, when The Diary of Anais Nin showed up at Bargain Books, I decided to pick it up because... why not?

I read Part of My Soul Went with Him by Winnie Mandela last week; it was really neat to see her perspective during the time of South African apartheid. Also, it was published in 1985, five years before Nelson Mandela was released from prison, and she was still reflecting on how she gave up any type of normal life for her cause.

Ernest Hemingway's six-word-novel of "For Sale: Baby Shoes, Never Worn" is what drew me to reading a slightly longer novel, True at First Light. This was written when he returned from Kenya in 1953.

That's it for now! Just a short taste on what you might find on an ND's students bookshelf. :)