LaFortune Student Center is home to one of the most popular student jobs for underclassmen. “Huddle Employees” work at some of the most crowded student venues on campus, such as Starbucks, The Huddle, Burger King, Pizza Hut/Taco Bell, and Subway. 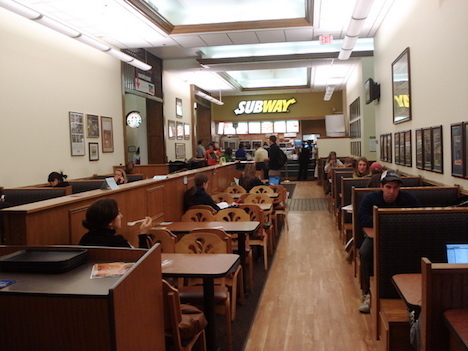 At the end of my freshman year, I decided to apply for a real job on campus to earn some spending money. Beginning August of my sophomore year, I began working three shifts a week, for a total of 6 hours at Subway (as Huddle Employees can sign up for shifts at any of the 5 food services in LaFortune). Students choose shifts based on the number of hours worked in the past, so I was one of the last to choose as a new employee. However, there are no minimum hourly requirements, so anyone who works at LaFortune can maintain a steady job while working only one 2-hour shift a week.

It is easy to get time off as well. As long as you notify a student manager at least 48 hours before missing a shift, it will not count against you. There is no maximum number of times you may ask for a "sub", or a shift off. Those shifts are then released in an e-mail, and other student workers can take the subs to work extra hours.

Prior to my sophomore year, I had little background in customer service, so I was nervous to get started. After working just a few shifts, I quickly improved and felt more confident working the register and assembling sandwiches. 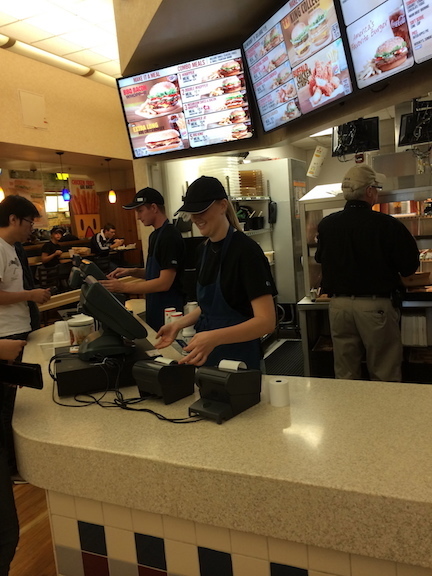 Due to my academic schedule, I was unable to work during the morning or afternoon. Instead, I worked most of my shifts from 10pm to midnight. Originally, I thought that I would be exhausted working until midnight, but it actually proved to be a refreshing break between working on homework and long hours in the studio on my architecture projects in Bond Hall.

Most nights, I was excited to go to work at Subway because I was able to see friends and acquaintances that were either buying sandwiches, studying at booths nearby, or just passing through 'LaFun' to avoid the snow. Sometimes when work was slow, I was able to chat with my student coworkers, who were a diverse group of all ages and majors. In fact, many of the students I worked with I would have never met otherwise.

Additionally, I was able to meet several other full-time Huddle employees who live in South Bend. Many of the full-time workers also took classes in local community colleges, which thoroughly impressed me, as many of them worked until 1:00 or 2:00 in the morning. Even standing for only 2 hours per shift would get tiring, which gave me a much greater appreciation for those who work in the food industry for 8-10 hours straight.

The hardest part about working at Subway was probably coming in with a smile after a bad day. Whenever I was stressed out, I still had to be friendly to customers and forget about whatever was bothering me at that moment. But by forcing myself to be positive and energetic, it subsequently improved my mood by the end of my shift.

Although I no longer work at Subway, I sometimes miss those late nights laughing with my coworkers and making sandwiches for my classmates. It definitely was not a glamorous job, but I earned money and worked hard in the process. I can now somewhat relate to others who work in the fast food industry and have a greater appreciation for those who work strenuous jobs all day then go to school at night. I would recommend this job to any student whose schedule requires flexible working hours!