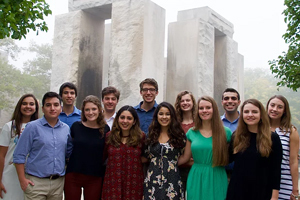 Senior Christianos Burlotos describes himself as a passionate adventurer. “Whether it’s a hike, climb, run, sail, paddle, bike ride, or drive, I’m always looking to get outside and explore.” That personality trait, along with his passion for sustainable development and interest in civil engineering led him to NDSEED, or Notre Dame Students Empowering Through Engineering Development.

NDSEED was founded in 2008 by six engineering students who wanted to put their skills into action through service. They partnered with the organization Bridges to Prosperity to build a footbridge in a rural Honduran community in the summer of 2009, providing residents with much-needed access to healthcare, education and marketplaces.

Since then, NDSEED has worked on nine bridges in three countries under the leadership of 72 Notre Dame students. Burlotos, a civil engineering major, has been on the team since his sophomore year and now holds the position of project manager. He directs the team during their twice-weekly meetings, and is the campus contact for Bridges to Prosperity, and Fundación Ingenieros en Acción, the partner for the current NDSEED project in Bolivia.

Senior Meg Tucker, also a civil engineering major, joined NDSEED as a bridge engineer because she had good friends who were involved and, she says “I wanted to see the impact that the skills I have learned in my classes can have in real applications. I also was attracted to the adventure of building in South America.” 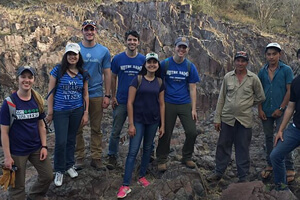 Bridge engineers have major responsibilities and, as Tucker says, they have the opportunity through NDSEED to put their skills to work in the real world. “Its my job to design a bridge that will enable people to cross rivers during extreme flooding that is also safe for our team to build.”

In addition to regular meetings, the NDSEED team has a variety of responsibilities that align with their roles. Tucker manages the technical side of the project. She designs the bridge, creates construction documents, organizes construction workshops, and makes sure that the team is ready to build the bridge as well as possible when the team arrives on site.

Several members of the NDSEED team, including Burlotos, Tucker, and sophomore Community Engagement Manager Camila Gonzalez, will take an assessment trip to Bolivia over the upcoming winter break. Then, in May, they will return to Bolivia with the full team and spend eight weeks building a suspended footbridge alongside an isolated community. 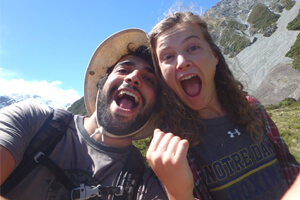 For project manager Burlotos, the NDSEED project combines the things he loves about his civil engineering major and puts them into practice. Those include “big picture” topics like the opportunity to study structural systems, as well as the potential to positively impact the built environment and the people who use that environment everyday. “As far as international development goes, I didn’t really know much about it until coming to Notre Dame. I always knew I wanted to ‘help people’ but I didn’t properly contextualize it until I came to Notre Dame and learned about the impact that civil engineers can have.”

Both Burlotos and Tucker say that NDSEED has been part of an exploration of their interests and talents at Notre Dame. “Many students at Notre Dame held a wide variety of leadership roles in high school, but coming to college is the time to explore what you’re really interested in and dedicate yourself to those passions,” says Burlotos. “It’s different for everyone. For me, that meant avoiding things I had done in high school, like student government, and finding something more tailored to my range of passions, like NDSEED.”