As an ITM major, a majority of my classes are technical or otherwise about some other aspect of business. That being said, the Mendoza College of Business leaves enough room for students to take other electives outside of business. To me, this is important because from what I've heard and experienced, in order to be successful in business, you can't be one-dimensional. Outside of my business degree, I've pursued classes mostly in design and Asian studies, but for my final semester, I am taking a class in the German department called "The Max Kade Seminar: Refugee Crisis in Germany."

This is a 25-person class where we discuss, read, and view films about some of the most prominent headlines being produced in Europe and around the world today. The professor is visiting from Germany; I think there is a huge advantage in having a German voice giving us insights into the current German situation and how it relates to the country's history.

Some time in late high school, I decided for myself that it was very important that I know what's going on in the world - not just for career success, but just for the sake of being educated and aware as well. I didn't know ahead of time how many opportunities Notre Dame would give me to learn about the world in ways that I couldn't simply reading a newspaper or book. Studying abroad is the obvious opportunity that Notre Dame makes readily accessible, but as evident with this new class about the refugee crisis, there are many other ways Notre Dame brings contemporary topics to campus as well.

Within the past few weeks, I was able to attend multiple events, lectures, and discussions on the same topics related to my seminar about the refugee crisis. All of these were held for free here on campus!

Why is Islamophobia on the Rise in Europe? 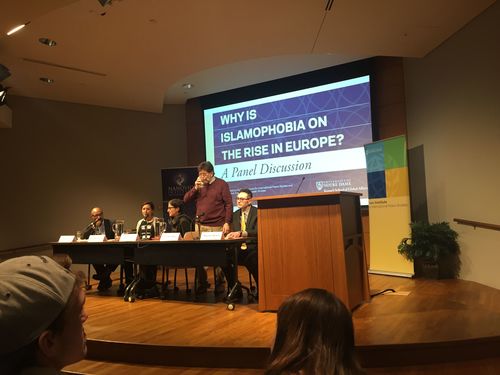 This was a lecture panel with visiting and Notre Dame experts, all from different fields and countries of origin. We talked about failure of multiculturalism in European countries, European colonialism, as well as the question of whether or not religions (Islam, Catholicism, etc) are or have been thought of as compatible with democracy.

Reclaiming Syria: A Roadmap for Justice 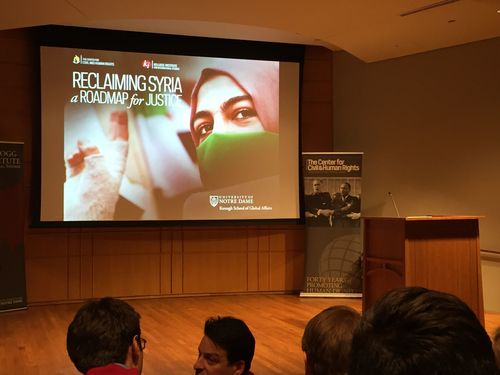 Dr. Radwan Ziadeh is an expert and analyst, originally from Syria, that took us through the crisis in Syria and the multiple factors fueling the conflict. Something I don't experience very often is hearing from an expert whose life is inseperable from the topic they study and analyze. This was readily apparent after Dr. Ziadeh showed a picture of corpes remaining after a mass killing in Darraya, Syria, and said, "the man on the left, in the blue shirt - that is my cousin." It was sombering to become so inescapably aware of how studying and learning about this conflict isn't just an intellectual excercise for certain people but will always be a part of their lives and memory even when the conflict "ends." 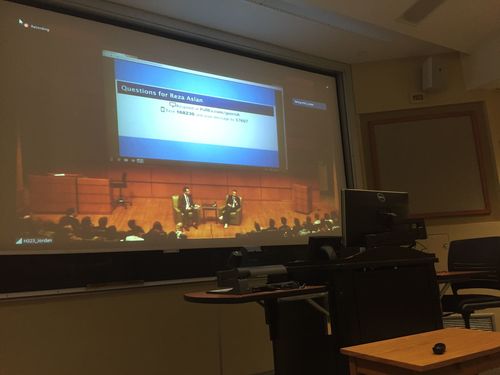 This was a very popular and anticipated talk in the Notre Dame community. As you can see in the picture, I couldn't get into the actual event even though I was there 10-15 minutes early. It was held in the Jordan Auditorium in the Mendoza College of Business, which must hold 200 people (if not more!). I was in one of the "overflow" rooms, of which there were four that were all overflowing with 30-40 people each. The speaker, Reza Aslan, spoke mostly about how religions have handled the exetremists within them and how the West is responding to growing threats from ISIS, whether that constant fear be reasonable or unreasonable.

The last related event I attended was part of the ScreenPeace Film Festival 2016, and was a film (Mediterranea) depicting migrants in Europe with a Q&A following the showing. I will write about this and the other films I went to in my next post!