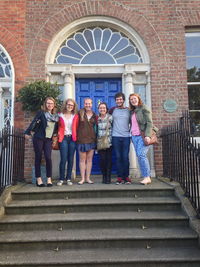 The flight from Paris to Dublin is short, so theoretically moving from Paris to Dublin should have been a breeze. But it wasn’t. After taking a “Goodbye Paris” walk with my friends, I got back to my dorm around 11PM and realized that I still had to pack most of my things. As a result, I ended up going to sleep around 3AM, only to wake up at 4AM to catch my flight. The icing on the cake was when my duffle bag broke in the middle of the Charles De Gaulle Airport. The only solution was to use a trashbag that the baggage check people offered me. Between being half asleep and toting around a trash bag wrapped in duck tape containing my life’s possessions, my entrance to Ireland was bit less than graceful.

Luckily, I was met at the airport by friendly faces. The lovely O’Connell House staff met us with smiles at the airport, whisked us off to our apartments on the campus of University College Dublin, before taking us back to O’Connell House where we were fed lunch, given a tour of the city, and taken to a local mall to buy study abroad essentials. In my frazzled state, I was so appreciative that after a semester of doing things for myself and cultivating independence, I got to start my summer with the support and help of people dedicated to helping me thrive in Dublin.

So just what is this O’Connell House? The building is on Merrion Square, one of Dublin’s loveliest parks, and the house is built in the iconic “Georgian” style of architecture. It originated as the residence of Daniel O’Connell, an important Catholic political leader of the 1800’s, known as “The Liberator.” Today, it is the Notre Dame Center in Dublin. Any Domer who ventures to Ireland is welcome here. It has a library, chapel, and classrooms. It has a staff whose job is to look after the various programs that Notre Dame runs in Dublin. 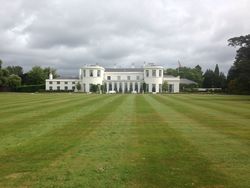 And just what are these programs? Notre Dame offers several programs in Ireland. They have study abroad programs at both Trinity University and University College Dublin, which allow students to spend either a semester or a year here. They also offer the “Dublin Summer Program,” where students can spend a summer studying in Ireland. In addition, they offer my program, the Irish Intern Program, where students can come work, research, or volunteer in Dublin for the summer. In August, a program called Inside Track allows 100 students annually to visit Ireland for a whirlwind trip. They also partner with House of Bridget, a program that allows ND graduates to spend a year serving Ireland through music ministry. O’Connell House also hosts various conferences and helps facilitate programs between Notre Dame and Ireland. 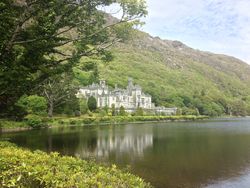 In other words, it is a place with limitless connections. Students who visit have the opportunity to really see the best of Ireland. Since I’ve been here, I’ve had the chance to meet some of Ireland’s top entertainers, business people, and politicians (including the US ambassador Kevin O’Malley, Senator Mark Daly, and President Michael D. Higgens). Within Dublin, we’ve had the opportunity to visit the Abbey Theater for performances, hike and swim in areas surrounding Dublin, and watch a Gaelic Football match at Croke Park. I’ve also had a chance to travel extensively through Ireland starting with a reflective weekend at the Killian Homeplace in rural Longford County, where Joan Killian Gallagher refurbished her family’s picture perfect cottages and graciously allowed the Notre Dame students to visit and experience the countryside. We also visited Glendalough where we were able to hike and explore the monastic city, Boyne Valley where we explored and played hide and go seek in ancient ruins, and Galway where we followed the footsteps of St Patrick. With the new union between Kylemore Abbey and Notre Dame, O’Connell House will be expanding to establish connections in Connemara as well. 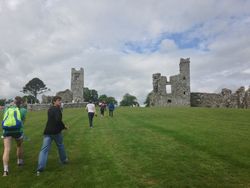 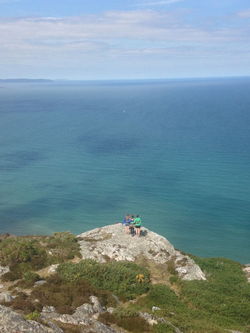 Students who get a chance to visit, study, or intern in Ireland are so lucky to have O’Connell House at their disposal. It is a place full of people who will support you academically, spiritually, and professionally while you are in Dublin. Whether you are arriving exhausted with a trashbag full of your belongings at the airport or are looking to make connections with Dublin’s top leaders, O’Connell House works to help you with whatever you need along the way. It is a place where you always feel welcome. It is a place that helps you open your horizons and embrace all of the wonder that is Ireland.