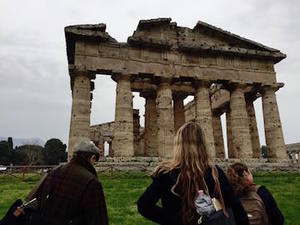 When I spoke with a fellow fourth-year architecture student about her year in Rome, she told me that the first semester flew by and the second one disappeared even faster. I thought about that comment a lot at the beginning of the second semester especially, and it couldn’t be more true!

In the midst of final reviews, project presentations, and completing research papers, my days in Rome are rapidly dwindling. With only one weekend left in the city, it is difficult to fit in all of my “lasts” before hopping on a plane Monday morning and heading home.

My first semester in Rome was almost entirely an adjustment. Everything was brand new, exciting, and stimulating. We all had to adjust to living in a hotel versus residence halls; many of us had to adjust our time management skills; and traveling to class by public transportation was a first.Aside from the classes, projects, and field trips, I have learned so much about myself during these eight months abroad. Above all, I have learned that it’s possible to make “home” anywhere. But of course, living in a warm climate with beautiful architecture and delicious food makes this adjustment so much easier! Besides the many perks of living in Rome, it wasn’t always easy adjusting to life in Italy. 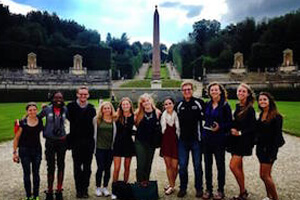 As January, February, and March passed by in the blink of an eye, my appreciation for Rome grew immensely. Things that used to annoy me about the city, such as waiting for the bus up to 20 minutes or dodging leisurely tourists when I was in a rush, no longer bothered me. Instead, they became part of my everyday life, and I already chuckle about these little things when I look back on my memories in Rome.

Following winter break, it was great to return to Rome after traveling for four weeks. It was then that I realized Rome had become a new place of comfort to me. It’s easy to take the little things like this for granted when they become so ingrained into life. However, this experience has made me appreciate the things I had taken for granted back in America. I’ve missed trivial things like driving my car, ordering bagels from Einstein’s, and hugging my big, fluffy dog. It’s safe to say that I’ve never missed these simple pleasures so much! 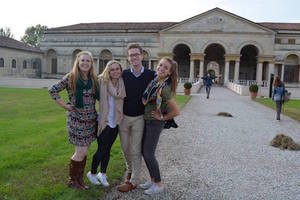 Yes, I will miss sprinting for the number 87 bus to make it back home. I’ll miss having the opportunity to wander the streets of Rome during class time to learn the history firsthand, despite my tired feet. And I’ll probably miss my daily morning cappuccino more than anything!This final week has been filled with emotional goodbyes, nostalgic walks, and conversations reminiscing about our first days in the city. While this year has been academically enriching and culturally fulfilling beyond expectation, it has been the most impactful on a personal scale. After living in a foreign country for eight whole months, I feel confident conquering new adventures, such as moving to a new city or country after graduation. Rather than fearing change, I have learned to flow with the twists and turns of life because no situation is perfect and things rarely go as planned.

While I am sad that my time in Rome is only temporary, it has taught me to savor every day and moment, to take time to pause and appreciate, and to embrace the unknown. This year has been tremendous in every way, and I am already planning my next trip back. Rome has definitely become my new second home!