This disgustingly cold weekend will bear witness to the thirtieth incarnation of our university’s finest and only student film festival. What is the Student Film Festival? The Film, Television, and Theatre department offers production classes every semester ranging from Intro to Film Production, a fun way to introduce students to the fundamentals of making short films, to Advanced Digital Cinema Production, a destructive nightmare of a class for the seriously production orientated. Once a year they pick the best (or in my case, the completed) films to show in a two-hour-long program five times over a weekend for students, faculty, and the public at large. Films compete to win the audience choice award which is, obviously, voted on by the audience. This year is the festival’s 30th anniversary, so hats off to the poor kids that had to shoot on actual film back when it started. 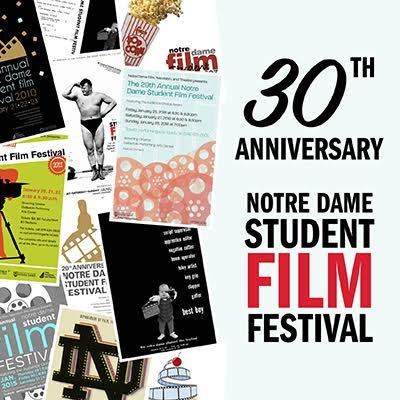 Keeping in mind that I am very biased towards this event, the Film Festival is incredibly important to our campus. The “Notre Dame” name is not often conflated with “fine arts” (did you know our business school’s great!), but that doesn’t mean the students that go here aren’t incredibly talented in the more "artsy" fields. Events like the film festival serve not only as a reminder to the creators that the school supports us and wants to show us off (which is actually pretty significant), but it brings that reminder to the student body at large. It is surprisingly hard to convince your friends to spend ten minutes watching a film you spent a semester on, but once it’s on the big screen they’re surprisingly supportive.

This year my partner and I have not one but TWO oeuvres in this festival. One, a comedic short, we made in Digital Cinema Production and honestly I still have PTSD from it. Image hauling about a dozen camera and light bags around at 6:30 am for weeks then reverting to a hermit in edit rooms for the rest of the semester for a seven-minute film that still isn’t right. Yeah. Our other film is a ten-minute long documentary that I love but also resent intensely. It covers a center in Lexington, KY that retrains and re-homes retired racehorses. Though I love the subject and am proud to bring them to a larger scale, I don’t like a lot of the edits our professor forced us to make. So I find myself both very proud and permanently cringing over being screened. But, I know I will always be my own worst critic and if I’m honest I’m reassured by the thought that most people at the festival won’t be film aficionados.

This year, I’m forced to reflect on my past four years at Notre Dame. I remember how impressed and inspired I was seeing the film festival as a freshman, and it does feel somewhat appropriate to be ending my ND career like this. Without being overly prophetic, hopefully, my films will provide the encouragement or inspiration for the students who follow. If nothing else, it’ll be a warm theatre on a cold evening and that’s something you really can’t take for granted on nights like these.