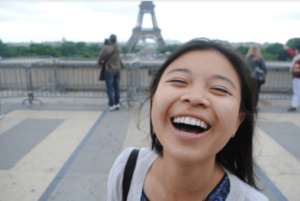 Ho, an Applied Computational Mathematics and Statistics major with a minor in European Studies, says she first became interested in France and European Studies after her first French language courses at Notre Dame.

“The intensive French courses quickly became my favorite classes, and the language my personal passion,” says Ho. “I never felt like I was working for a grade, but rather to improve my command of the language.”

In her free time, Ho worked with the language tutors at the Center for the Study of Languages and Cultures, read French children’s books, and participated in Le Cafe Français, a French coffee hour put on by the Department of Romance Languages and Literatures.

Ho’s most recent Fall Break trip to France was funded by a research grant through the Nanovic Institute for European Studies. The Nanovic Institute offers grants that allow undergraduate students to pursue their studies abroad, part of its mission as an interdisciplinary home for students and faculty to explore the evolving ideas, cultures, beliefs, and institutions of Europe.

Director Dr. A. James McAdams, who is also the William M. Scholl Professor of International Affairs, says the entire process, from grant proposal to study abroad, is a learning experience.

"Our students have special opportunities to act on their academic interests and professional aspirations. The benefits are many. Applying for a grant is itself a great learning experience. Faculty members become more closely involved in mentoring students through their projects. The entire process connects applicants with the history, culture, and contemporary issues in Europe in a serious way. Additionally, students are encouraged to reflect upon what it will mean to live and work in other countries. The many benefits of these experiences are shown when students return to Notre Dame and realize that their independence and curiosity have transformed their lives."

Study Abroad on Your Time 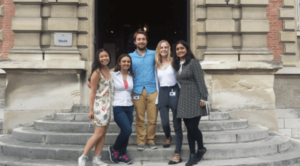 The Nanovic Institute offered senior Nicolle Ho the opportunity to study in France outside of the traditional semester or yearlong study abroad programs. On her first trip during January 2017, also with a grant from the Nanovic Institute, Ho researched the dynamics of Vietnamese diaspora communities in France.

“I chose France in particular because I am interested the cross-cultural dynamic between the France and Vietnam, the birthplace of my parents and my heritage. Vietnam was under French colonial rule during the Indochina period, and it is fascinating to see French influence over Vietnamese culture.”

There, Ho worked with the Microbial Infection and Individuality lab, which studies mycobacterium tuberculosis. She developed an automated data analysis Python language program that reads microscope data and produces a growth chamber visualization.

These experiences were a perfect combination of her interests in science, language, and culture. They ultimately led her to return, with another Nanovic grant, over Fall Break to continue her work.

The World is Your Classroom 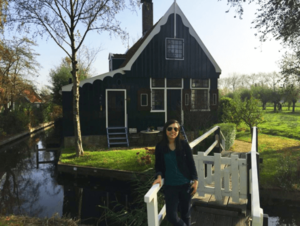 Fellow senior Anvi Ton, who has a double major in finance and sociology, also traveled on a Nanovic Institute grant over Fall Break. She spent the week in the Netherlands, a country in which she has an interest from both a cultural and academic standpoint.

“As a flourishing cultural center and the home of historical heritage sites, including the Anne Frank House and the Van Gogh museum, the Netherlands is a prominent leader in social innovation, particularly in cultural and community empowerment. Through the emphasis on social impact and the astute awareness of contemporary social issues, the country has brought the idea of corporate social responsibility to the forefront of national dialogue,” says Ton.

She’s interested in the cultural changes happening in the Netherlands and her Fall Break grant gave her the opportunity to explore them, as well as to pursue her academic research.

An extension of a previous project begun in the United Kingdom, Ton spent the week conducting interviews with investment bankers in Amsterdam, particularly those associated with the the Social Impact Fund, at the bank ABN AMRO.

Through these interviews, bankers and portfolio managers explained the complex financing processes of Social Impact Bonds. And through her exploration of a new city, Ton saw her research come to life.

“No matter where I turned, whether if it was to a restaurant waitress or to a random passerby, each one had something positive to say about the changes that he/she was seeing in his or her community, and how each one of them seemed to have a role in its enactment,” she says.

These experiences supported Ton’s passion for her finance studies and how finance can be a powerful tool for social justice. “In this regard, I hoped to continue to engage myself in studies and pursuits that require a paradigm shift and changes our conventional way of thinking about the relationship between finance and social welfare.”

The Nanovic Institute for European Studies supports students who are passionate about taking their classroom learning into the world. Learn more about grants and fellowships for undergraduate students.