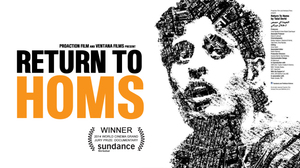 Five critically acclaimed films were shown for free at the DeBartolo Performing Art Center here on campus this past weekend (February 5, 6, 7). Each of them involved a different region of the world, including Asia, the Middle East, or Africa. Each addressed the serious conflicts within their respective regions.

The Screen Peace Film Festival is put on annually by the Kroc Institute for International Peace Studies, but this is actually the first year that I knew it existed. I think I only found out about it from a professor because the class (Global Religions) and her field cover topics that are relevant to peace studies. After seeing one film this year, I’m disappointed to know that I have missed it my previous two years, especially after reading about the films that showed last year.

You can see a list of the films shown this year at www.kroc.nd.edu. It includes short summaries and a trailer for each movie. I decided to see “Return to Homs” because it covers the Syrian Civil War and follows Syrian rebel fighters over the span of three years as they fight against an oppressive regime. It was released in 2014 and, being so, it was sort of eerie to know of the violence that will occur in the country years after the violence portrayed in the film.

At first, part of me wondered why the Kroc Institute chose to show this film because, on top of endless and sporadic violence, the narrators of the film (who are the rebel fighters themselves) explain that there is no other option but to be violent. In other words, it seems like there was no lesson to learn, no goals behind the violence, and “peace” looked to be completely hopeless. In the end though, I think it’s better to show the reality that exists in the world, even it can’t fit into a sensible story that includes good guys vs. bad guys, causes and affects, or conflicts and resolutions. The film basically ended by telling us that the narrators were currently trapped in Homs and the violence continues. Later we learned from the follow-up discussion that the main narrator, who was the closest thing to a protagonist in the film, was now rumored to align himself with ISIS. Because of reasons like this, it was exhausting to watch – everything was seemingly senseless violence. Most of all, I was angry for all the women and children whose lives were (and still are) at the mercy of violent acts of others.  They are not even safe in their homes.

Because these films cover very important global issues, I would encourage you to at least see one at next year’s Screen Peace Film Festival. It’s always good to know what’s going on in the world, especially if you meet someone from that region or that has family from that region – just to have some background information on what is a significant part of their lives. Also, DPAC has a running list of other films showing year-round at PerformingArts.nd.edu.