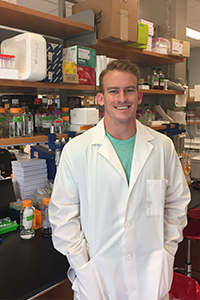 Jack A. Harris may be an undergraduate science major, but he’s also a cancer researcher with an abundance of lab experience who’s ready for the next step—dental school. Harris started at Notre Dame with a preprofessional studies major intent, but says the science-business major, with its focus on practical business applications, aligned more closely with his interests.

Harris is busy applying to dental school, but he’s most passionate about the medical research he’s been able to conduct while at Notre Dame. He’s a cancer researcher at Harper Cancer Institute, where he investigates the interaction between tumor cells and the tumor microenvironment in a metastatic brain context. He’s also held internships at the McDonnell Genome Institute at Washington University Medical School and Northeast Oral and Maxillofacial Surgery group in Houston, Texas, and has worked at the Genomics and Bioinformatics Core Facility at Notre Dame.

Harris has been interested in science since he was a little kid. “My grandma used to tell people this story about how she would come over on Saturday mornings and all I would want to do is have her quiz me on math and science flashcards,” he says. “From there, I only became more inquisitive, buying books in middle school on the history of the genetic code and even coming in for a ‘zero’ hour in high school before school started for AP Chem, AP Physics, and AP Biology. Becoming involved in research has only allowed this interest and passion to blossom.”

Despite being occupied with research outside of class, Harris has been able to fit in a wealth of extracurriculars, including cheering the Irish on to victory as a Notre Dame cheerleader. In the past, he’s traveled to the ACC and NCAA tournaments and plan to travel with the football team and men's basketball team in the coming year. 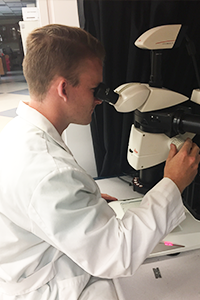 Harris has also served as Dillon Hall president and vice president, and he’s volunteered with the Community Alliance to Serve Hispanics (CASH), using his Spanish skills to assist and teach English grammar and writing skills to Spanish-speaking adults. It’s work he loves and, when he’s established a practice after dental school, he plans to combine his interests and do volunteer medical work in Latin America.

If you’re a high school student with an interest in science, Harris recommends seeking out opportunities as early as possible. He started shadowing and interning at local hospitals in high school. “Personally, my experience in a hospital showed me that I would rather work in a more private setting than in a hospital, which led to the shift from wanting to go to medical school to dental school,” he says.

“These experiences will not only show you what you want to do as a future career, but also what you don't want to do, which is just as—if not more—valuable. Also, explore all of your medical/health-related career choices. Going into college, I would never have thought in a million years I would want to be a dentist. Open your mind to the many possibilities.”

Finally, says Harris, be ready for new experiences. “Take a break, relax and prepare your mind, body, and soul for a fun four years.”