Abigail Schnell ’18 did some acting as part of the speech team at her high school, but it wasn’t until her senior year that she acted in her first play. Through that experience, and then her enrollment at Notre Dame, Schnell discovered a love of acting and especially of Shakespeare.

At Notre Dame, Schnell got involved with the student-run Not-So-Royal Shakespeare Company as a first-year student and has acted or worked backstage in two plays each summer, with three this year, for a total of nine since she started at Notre Dame.

What she loves most about performing Shakespeare, Schnell says, is that it has taught her how to act. “When you do Shakespeare, you are forced to make your intention clear despite some difficult verse that the audience sometimes won't be able to follow along with,” she says. “It really forces you to learn how to act clearly and with intention, and performing these works has absolutely contributed to my development as an actor as well as my development as a human being.”

During the 2018 Notre Dame Shakespeare Festival, Schnell is assistant director for both the Shakespeare at Notre Dame touring production, The Merchant of Venice, and the mainstage production of The Tragedy of Othello, the Moor of Venice. She is also the stage manager for two special performances of the play Blood Knot by Athel Fugard. 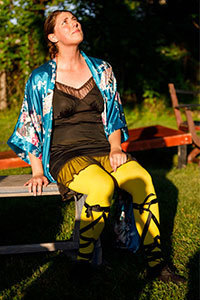 Schnell as Malvolio in Twelfth Night

Being part of both the touring company and the professional company have given Schnell different but equally valuable experiences. With the touring company, which performs outdoors in cities and towns near Notre Dame, Schnell says she’s able to connect with a play’s audience in a very real way.

“Once, after a performance of Love's Labours Lost, a young girl came up to me and wanted to know if I was okay because my character was sad at the end of the play. I never would have been able to make that connection indoors,” says Schnell.

“Even today, just over 400 years after his death, we still all can learn something from Shakespeare if we approach him from where we are right now instead of putting him up on a pedestal or looking at him as a dusty relic of the past,” says Schnell. “He's us. He has so much to say about who we are right now.”

If you have ever been intimidated by Shakespeare, or think he's just not for you, Schnell recommends giving him another shot. “See a play. Read a sonnet. Learn a monologue. Shakespeare belongs to everyone, and I'm proud to be part of Shakespeare at Notre Dame's mission to bring Shakespeare to everyone.”