Prathm Juneja's passionate interest in civic engagement and technology have led him to a double major in political and computer science through Notre Dame's Reilly AL/ENG Dual Degree Program. He is also a Glynn Scholar and was named a Newman Civic Fellow, a program that provides training and resources to help students develop innovative and collaborative strategies for social change. Here, Juneja talks about shaping his career goals through experiences on campus, as an intern in the South Bend mayor's office, and through a summer internship with MicrosoftNY.

Why did you choose majors in political science and computer science?

I’ve always loved technology, and in high school I really fell in love with programming—there was something incredible about writing a few lines of code and instantly seeing the results of your work. In high school, I also got the chance to get involved in my school’s Model UN and Debate teams, which over time led to a strong passion for public service and government. Notre Dame gave me the incredible opportunity of studying both subjects, political and computer science (often described as the two “fake sciences”) and I’ve stuck to them ever since!

Have you always been passionate about these topics?

I think high school was really when I figured out that I cared about politics and I cared about programming, but it wasn’t until Notre Dame that I realized they share something in common. I think my passion is really for building equity through institutions, and I’ve realized that the idea of programming for the social good mixed with the impact of government is a great way to push us towards that goal of equity.

Which social/political issues are you most passionate about?

Voting rights and civic engagement have always been major passions of mine, mainly because they manage to impact every other aspect of the political spectrum. I see voting as the fundamental part of our democracy, and when people are robbed of their rights, it is the peak of unfairness. Inclusion, particularly on campus, has always mattered deeply to me, and it is part of the same thread of using sociopolitical systems to make our communities fairer and more equitable.

Which off-campus experiences have been the most impactful for you?

Last summer, I had two really incredible experiences that helped me shape my goals and work. I started off the summer by attending a conference in New York, the Personal Democracy Forum, which was focused on all of the different ways we can use technology for the common good, whether in government, politics, nonprofits, or dozens of other fields. It was an eye-opening experience, primarily because it cemented my passion for this brand new world of “civic-technology,” and also because it introduced me to some of the major players in the field, including the small, social good focused team at MicrosoftNY I joined last summer.

I also interned for South Bend’s Mayor Pete in both his office and his Office of Innovation, which put into practice a lot of my work in legislative politics and civic tech, giving me a chance to understand better and contribute to the institutions that have immense impact on our communities. 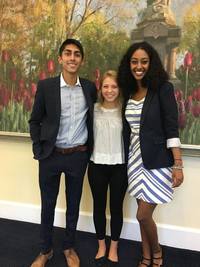 What kind of work did you do at MicrosoftNY?

I was on the MicrosoftNY team as a civic technology fellow, which was an incredible opportunity to join a really small team that is focused on using technology for the common good. I programmed open data chatbots, built websites that empower citizens and politicians to use open data, and worked with public servants to implement jobs training and education programs. It was the perfect mix of my two majors, as I was programming for half my time and meeting with folks from across the city in the other half to understand their needs and help solve some of their problems. I was based out of a co-working space in Manhattan, and I lived in Jersey City, right across the Hudson. Living and working in NYC has always been a dream for me, so I did all that I could to really take it in.

What do you want to do when you graduate?

Graduation is a bit of different story for me, since I wont be leaving campus until December of 2019 instead of May. I'm in the five-year AL/ENG Dual Degree program that I should be finishing up in 4.5 [years]. After that, my aspirations are really just to put myself where I can do the most good. Immediately out of school that may mean working somewhere in the intersection of government and technology (local government, a place like Microsoft, or a non-profit) or it may mean going straight into politics, jumping on to a campaign, and helping out there. In general, I hope to be in a field that empowers citizens and makes government work better.

Do you have any advice for future Notre Dame students?

My general advice, both for prospective students and incoming students, is to focus your work and time on making a demonstrable impact. Whether that’s in art, politics, writing, engineering, or practically any industry, Notre Dame provides every student with incredible opportunities to not just learn and grow, but also to use that knowledge to help others. Let this manifest in your extracurriculars and major choices too; do what you love, do what you enjoy, and do what you can to make the greatest impact.