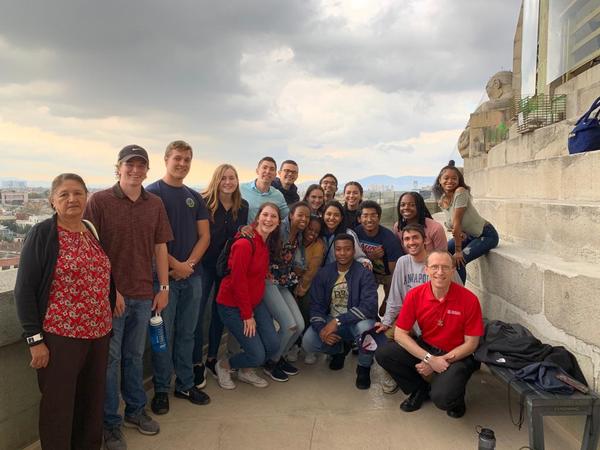 Every Fall and Spring Break, Notre Dame's Campus Ministry takes students on religious pilgrimages. This past Fall Break, I was privileged to be in the cohort that went to Mexico City primarily to visit the Basilica of Our Lady of Guadalupe. Throughout the duration of the pilgrimage, we were fortunate to be able to visit many religious sites, churches, and various locations in Mexico City and the surrounding areas which allowed us to immerse ourselves in Mexican culture. These included the Teotihuacan pyramids, the gorgeous Museo de Antropologia, and The Little Spanish-English School founded by Notre Dame alum John Ormenik. During the trip, I ended every day by reflecting on the happenings of that day and on myself, how I felt, and what I thought about everything we had done.

One thing that constantly stuck out to me was how much more willing I was to be around people. I am someone who usually enjoys people’s company but enjoys my own company just as much. However, during this pilgrimage, I found myself not wanting the days to end regardless of how tired I was or how much walking we had done. I just wanted to be around my cohort, my friends, all the time. I really had to think about why that was. I think I arrived at my answer on the last day. I believe it was because I was surrounded by people who wanted to develop a stronger life of prayer and faith. One of the hardest things to come to terms with about my life was that at Notre Dame I may be one of the few people who actually, regressed in their prayer life. With academics constantly looming and all my extracurricular endeavors, I always found a way to convince myself that I did not have enough time to pray or reflect.

It was different in Mexico City. Wherever I went, there was always time to sit down and just listen, to talk to God, to continuously build that relationship, whether it be during a Mass or just absent-mindedly staring outside of the bus window while the busy streets flew by, I was able to just take some time and thank God for His Graces or ask Him for guidance. It was so much easier for me to do this because everyone around me was doing the same. While I was there, I experienced a peace that I had not had for a very long time.

The pilgrimage also provided me with a key lesson and it was in the realm of human interaction. On Wednesday, we visited The Little Spanish-English School. When we got there we were greeted with the site of many happy-faced, elementary-aged children and in no time they swarmed around gleefully. Throughout the evening we were there, we held activities with them, played chess, created art pieces, ate amazing food prepared by the mothers as well as a soccer game to end the day. In every single activity and every way, we interacted the children were just warm and welcoming, not even a language barrier - for the half of us not fluent in Spanish - could keep them from drawing us in and embracing us as their own. It felt as if I had known these kids.

The experience was really eye-opening because I began to think, why isn’t everyone like this? Why do we have so many biases and preconceived notions of people before we meet them? Why do we judge people based on what they look like or sound like? And to each of those questions, I could not find a legitimate answer. It seemed so obvious that we should all be like these children. These kids took us in like we were family even though we just met them. As we drove back to the hotel, I made a promise to myself to work at being like those kids, to embrace anyone who I may come across, to show the hospitality to people that I would want them to show to me.

I know it will be difficult to maintain the level of peace I felt while I was there through prayer and reflection, nor will it be easy to embrace, rather than keep people at an arm's length, because as humans we do not always agree with one another. Even while we were there, several protests occurred and we discussed the current happenings concerning the Church and the division between people. However, if there is one thing that became obvious to me as our journey came to an end, it was that whatever we devote time to in our lives expands. It is a lesson my mother had been trying to get across to me and one that I finally came to understand while I was there. My experience in Mexico City has given me the courage to strongly pursue that prayer life that I want and the connections with others that I want to expand.