Here at Notre Dame, I am part of SUB (the Student Union Board), which is a student organization in charge of putting up different types of events for the student body. A couple of weeks ago we organized the fall concert and we invited the talented Hunter Hayes to perform on campus.

Preparing the concert was an unbelievable experience. It is an arduous job that began a whole semester before with the planning and cramming of all the last minute things the week of the event. The concert itself was on a Friday, but we started building the stage and setting up the venue the afternoon of the day before. It was just after classes were over on Thursday when the SUB volunteers and the concert team went to the venue to help unload the trucks with all the parts to build the stage and the barriers, but also to go and buy last minute item for the artists. When people are on tour, they know exactly what they want and provide a very detailed list of various snacks and pieces of furniture. I still don’t understand why someone needs 5lbs of pistachios or an 8 feet L-shaped couch; but it was our job to get all we could to make the musicians comfortable at ND.

All the hard work paid off when we got to hear the sound tests and meet Hunter Hayes in a meet and greet. 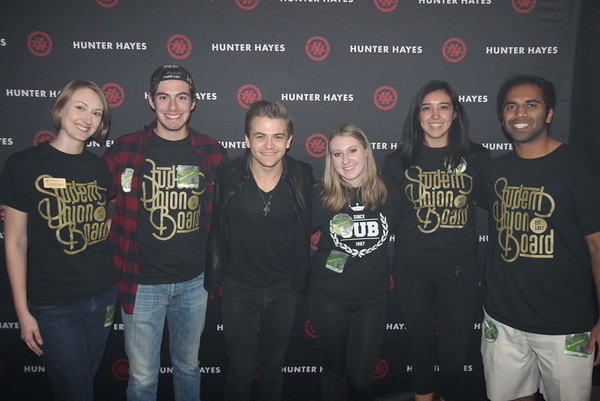 My friend, who is a huge fan of his, could not believe the opportunity I had, so I got an autograph dedicated to her.

Then, we waited for the actual concert. We sold around 1,600 tickets, which was over what we estimated. The show itself was great; Hunter played for a full 90 minutes and even wore a Notre Dame cap after the half-time break. During the show, we were allowed to be backstage and learn how staff and artists work together to throw such a spectacle.

Once the concert was over, some SUB people, including me, had to create a human blockade so the fans didn’t rush the tour buses. We had to stand there for several minutes until the fans gave up; but that didn’t happen without them trying to convince us to let them pass or them trying to pass around us altogether.

Finally, when everything was over, it was time to take the stage down and put everything just how we found it. Obviously we required the help of volunteers once again to load all the equipment back to the trucks. Surprisingly, that took way less time than unloading the vehicles, so we had time to call in some pizza to thank the volunteers and celebrate another successful event.

This was most definitely one of the coolest things I have been part of while here at Notre Dame. We did not only get to see how months of planning and hard work materialize in one awesome show, but we also had one of many learning experiences that students have here that are not taught in a classroom.