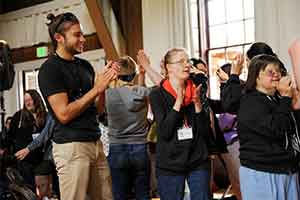 Last summer, Jonah Cremin-Endes experienced a shift in perspective. No stranger to service work, Cremin-Endes went into the Center for Social Concern's Summer Service Learning Program (SSLP) with an open mind and heart, and he came out with a greater understanding of what it means to be human.

SSLP is an eight-week, service-learning course in theology in which students are placed at more than 170 nonprofit agencies across the country. They work at least 35 hours per week and many times live in community with the people they serve. Room and board are provided by Notre Dame Clubs throughout the country for students who choose to live on site or with alumni host families, while other students live at home and work in their hometown communities.

Cremin-Endes spent his eight-week stint at a L’Arche home called Noah House located in the Capitol Hill area of Seattle. L'Arche offers people with developmental disabilities a family-style living environment that allows them to develop their talents and build friendships. Cremin-Endes, a senior biochemistry major, spent his days shopping, cooking, cleaning, dispensing medications, helping with personal care, and offering companionship to members of the L'Arche community.

"The time shared with L’Arche was filled with the act of enjoying the presence of others," says Cremin-Endes. "This presented itself through time in the house cooking and cleaning along with activities in the park and relaxing the backyard." These simple activities had a profound effect on him. "For instance, my perception of a trip to the grocery store shifted from a task best completed as efficiently as possible to an opportunity, guided by the core members, to connect with as many people as possible, and maybe buy some food too."

Ben Wilson, interim director for the Summer Service Learning Program, facilitates student placements. He says the overarching goal of the program is connection. "It is truly an honor to witness and support the generosity of such a committed group of students each summer who seek out opportunities to learn from and walk with the people they meet at their SSLP sites. Our hope is that students more deeply realize their own belonging and connection to our one human family made in the image and likeness of God and come to understand more critically some of today’s most pressing social issues."

Current SSLP participant Valerie Caamaño-Pichardo, a junior psychology major, is doing refugee resettlement work with Catholic Charities in Atlanta, which is close to where she grew up. Having lived in the area, she says she knew much about the diversity of the Atlanta-metro region, but little about the refugee population. Her interest in the people of the area, and her need to discern her own views about the political issues surrounding immigration, led her refugee work.

Her worldview is expanding every day. "It's allowing me to connect with a vulnerable population in ways that I never thought possible and ways that I never even considered," she says. "The people I meet broaden my horizons every day and they give me hope about how the world will turn out. They have earned the description of resiliency a million times over and they don't plan on giving up."

In addition to experiential learning, SSLP students complete coursework that includes classroom sessions in April, reading and writing during the eight-week immersion, and follow-up classroom sessions in the fall. Jonah Cremin-Endes says the combination makes for impactful learning. "The interaction of academic readings and lived experiences fostered palpable personal growth as I worked through some of life’s larger questions."

More than 225 students participate in SSLP each year in more than 40 different states. The agencies they work with include those that address homelessness, healthcare, pregnancy and women’s issues, and community organizing, among others.

Visit the Center for Social Concerns to learn more about the Summer Service Learning Program and other initiatives. You can view a video of students and the people they serve here.