I'm a huge fan of the internet and how much information we have at our fingertips as long as we seek it out. As a Notre Dame student, I also believe it's important that we stay well-informed considering our univerisity asks of us to "become a force for good in the world." In other words, I think it's hard to accomplish this unless we know what's going on in the world and therefore can make more educated and compassionate decisions as we become leaders in our communities and beyond. The following is a short list of digital news and magazines that I believe many ND students could find value in based on the type of content and the engaging way it is presented. Hopefully, you will find one that you can see yourself following - or at least find a neat post/story/video along the way! 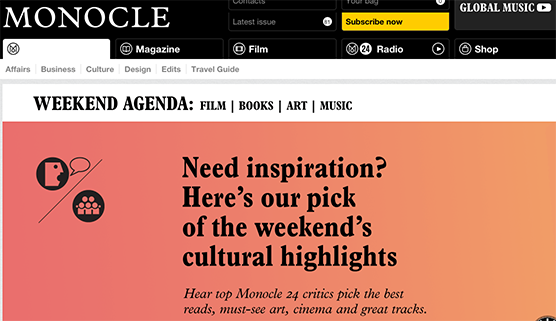 The National Review described this magazine (in a post titled "For the New Emperors") as "the bible of cosmopolitan elites," so if that's your aspiration... then you're in luck! In addition, Monocale is described in this article as a "particular brand of well-heeled global urbanism" and the "considerably hipper seven-year-old cousin" of The Economist. I am smitten by that comparison alone.
Anyways, I think this is a great, engaging way for ND students to keep up with global affairs, cultures, and news. With Monocle, there are so many ways to digest this digital magazine, whether that be through podcasts (The Globalist, The Curator, The Urbanist, etc.), films, or long form journalism. One of the sections is over business too, by the way, so international business majors may find this exetremely relevent.
I personally love the global music station - partially because of the international music and partially because of the radio hosts' British accents! 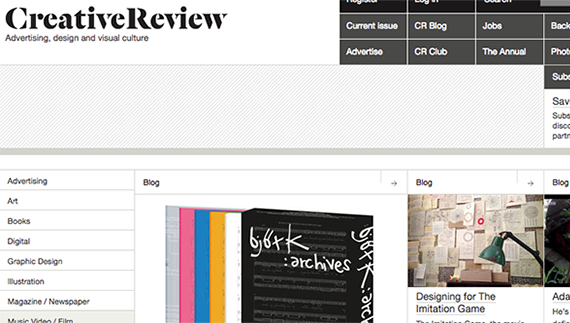 This is a magazine/iPad app/blog/twitter feed that features contemporary advertising, design, illustration, new media, photography, and typography. Notably, this especially applies to design and FTT majors at ND (and overwhelmingly applies to Visual Communication Design), but I see a lot of cross over between other majors such as Marketing, Architecture, Journalism (publishing), etc. For marketing majors, I think how relevant it would be to read about logo designs, advertisement creations, and even something like an illustrastion campaign for a city's Chinese New Year celebrations. I think even minors like Peace Studies could gain something from creative magazines, because things like visuals play a large part in spreading important messages (for example, check out how powerful the The Refugee Project is, which was listed on "Designs of the Year 2015: the nominations").
Even if the Creative Review doesn't apply to your field of study (accounting?), it can still introduce you to some pretty neat things going on in the creative world, which you know, includes music if you like music. I just ran across a pretty cool (yet odd!) music video by Childish Gambino on a post titled Music Videos of the Month. I was also going to read about FKA Twigs, a rising Indie R&B pop trip hop electronic artist who is "redefining the contemporary pop star," yet it was subscriber restricted content, which is a total bummer.
Graphik.com is another visual culture magazine that I would recommend as well if you like Creative Review. 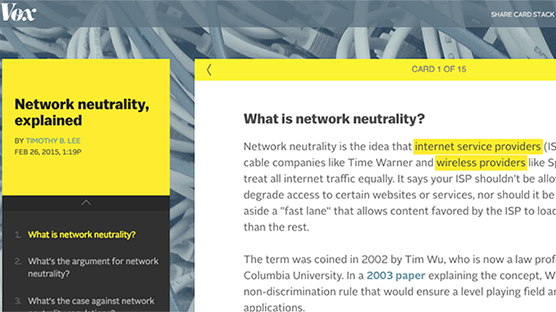 This is an explanatory journalism website - not to say it doesn't have strong biases in certain topics, though. I would say Vox is a little bit more relaxed then Monocle, as in, it tries to entertain through certain posts like "27 hilariously bad maps that explain nothing" and covers mainstream entertainment events like the Oscars (check out: "Why the Oscars Best and Worst Dressed List Matters"). One thing I like about Vox is they have StoryStreams that list posts on the same subject in chronological order and have "Card Stacks" that serve as background or regional information for covering a current event. Every now and then, Vox will borrow content from other media websites and build explanations around it such as a post explaining Iranian history after including a video of Iranian hairstyles throughout the century. Vox puts information into context for an average college student and stays relevent and interesting, which is why I recommend it to any of my ND friends. 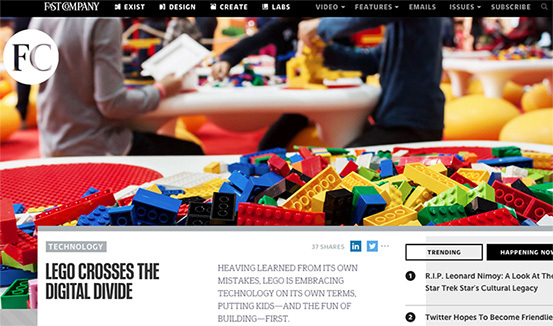 Fast Comany has a lot of post related to innovative technology and design, but also a lot to offer when it comes to content about leadership, productivity, and careers (check out: "The Best Career Advice To Tap Your Creative Potential" or "The CEO Of The Future Is The Designer-In-Chief"). I don't think the relevency of the posts are limited to Mendoza business students or those who want to go into business, because topics like "leadership" and "productivity" cover all fields, even if a particular post has a business focus. In addition, there are a collection of posts that are just eccentric and interesting in nature and neat to know about whether or not they necessarily add value to your education or future career. (For example: "This Lifeguard Tower Becomes An Igloo When It Snows.") 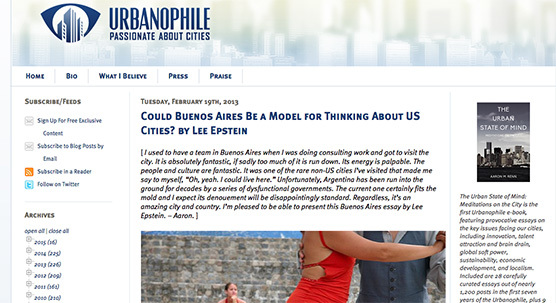 The creator of The Urbanophile, Aaron M. Renn, writes on his "What I Believe" page:

I’ve always been fascinated with cities and finding out what makes them tick. Why do some cities succeed while others fail? What works and what doesn’t? When faced with a moment of challenge, why do some cities rise to the occasion and others fall by the wayside?

I keep up with The Urbanophile because Renn posts long-form articles along with videos and other media, all with the goal of explaining or showcasing various aspects of cities around the globe. For example, there is a video showcasing Kiev, Ukraine in 2012, before the Ukrainian Crisis, and another post showing time laspe videos of Cotonou, Benin and Istanbul, Turkey. Another post, titled "Global City Framework" analyzes what makes a global city and which cities serve worldwide economic, political, or cultural functions. And since I can't get enough of the time laspe videos highlighting certain cities, here's another of Ho Chi Minh City in Vietnam! Overall, I believe having an understanding of cities would be especially applicable to economics majors, political sciences majors, or anyone that wants to work in developement.

One of the main purposes of writing this post is showing that there is so much valuable and engaging content outside of the popular and established digital news sites like The Economist, The Huffington Post, or BuzzFeed. Happy reading, and I hope you find quality digital content that caters to your interests!