In light of the recent terrorist attacks in Paris, I have decided to write about France, a place I am extremely passionate about, as some of my fondest Notre Dame memories have occurred during my time in this incredible country.

As a freshman in high school, I had to make a choice: which language to study for 3-4 years? Of course, nearly everyone studies Spanish in high school, and for good reason.  It’s practical, and it’s widely spoken in certain areas of the United States. Without much thought other than wanting to learn a less-popular language, I chose “French I” on my requested course form in the summer of 2009. Never did I imagine that decision would lead me to so many spectacular places, people, and experiences in the years to come.

When I began college, I decided to continue learning French despite my already packed five-year architecture schedule. My expectations were low, but I decided to apply for a Summer Language Abroad Grant in France to take French courses at a language school and live with a native French family. I was beyond surprised when I was awarded enough grant money to cover my flight, tuition, and accommodations for six weeks in Tours, France, a city about an hour outside of Paris by train.

A few months later, on June 14th, 2014, I left America completely alone to embark on my first international flight and live with a family of strangers who didn’t speak English. I was incredibly anxious, excited, and a little bit scared of the summer to come. It was literally a leap of faith “across the pond” into a land I had only dreamed of in the past.

When I landed, I was thrown into the unknown, and I had no one to rely on but myself. Due to transportation strikes, a commonality in France, I had to find an alternative way to travel from Paris to Tours. Minutes after getting off of the plane, I was forced to use my broken French to communicate with anyone I believed could help me find my way. As I sat shaking and teary-eyed in an overbooked train somewhere in Paris, I felt as if I had landed flat on my face in this "leap of faith." I was not ready to do this on my own.

After my initial struggles traveling alone and adapting to French culture, I slowly began to adjust to my new environment. I began to thrive in my French classes at the language school, grew confident in my abilities to communicate with my host family, and conquered my fear of public transportation. Although transitioning to a new way of life was gradual, I quickly fell in love with everything French.

I fell in love with the townhouse on Boulevard Heurteloup, along with the view from my attic room overlooking the city of Tours. 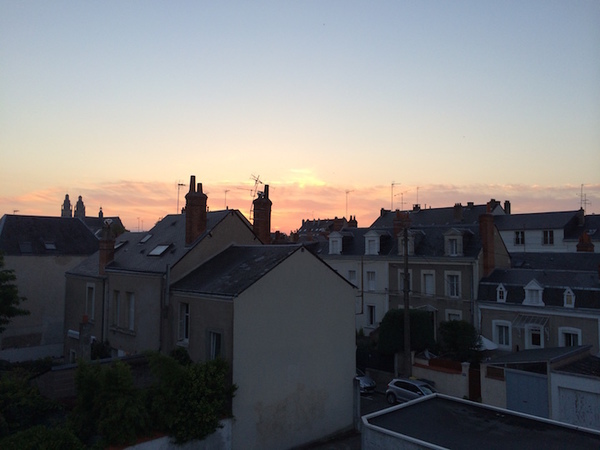 I fell in love with the smooth, slurred sound of people conversing in French, despite my abilities to comprehend every sentence.

I fell in love with the way the French valued family; we ate dinner together nearly every night even if it meant waiting until 10:00pm.

I fell in love with the relaxed pace of life, as every meal is savored and every conversation is more than just “Bonjour!”

I fell in love with the freshest pastries and the savory crêpes made with any ingredient you can imagine. 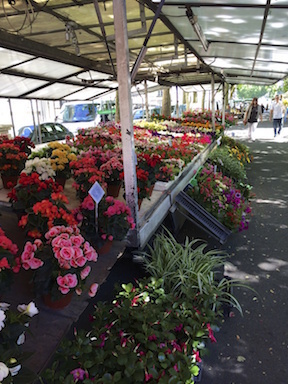 I fell in love with the charming French elementary schools full of bright-eyed children laughing and playing together every day.

I fell in love with the Sunday picnics in the gardens and the markets, which filled the streets with flowers of every color, shape, and size.

In the Loire Valley, I fell in love with the Baroque chateaux of Chenonceau, Blois, and Chambord, which stimulated my passion for architectural design.

In Normandy, I fell in love with the magnificent views of the coast from Mont St. Michel.

In Lyon, I fell in love with the Italian influenced warm-colored buildings along the Rhône.

When I finally visited Paris, I couldn’t stop myself from smiling as I observed the streets bursting with young people enjoying cigarettes together in every cafe for hours in the afternoon, the families enjoying the warm sun on the Eiffel Tower lawn, and the unique juxtaposition of tourists and posh Parisians on every corner. Once I visited, I knew that I would be back in no time at all. 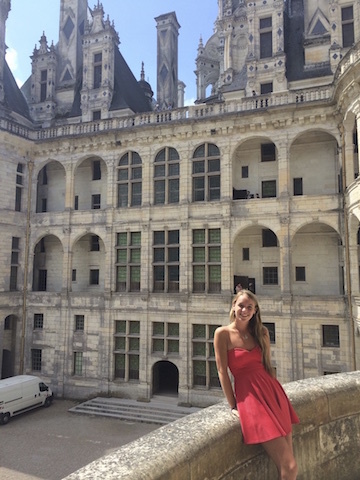 Those six weeks I spent living in France were the most impactful and enriching days of my teenage life.  Not only did my French improve drastically, but I also developed confidence, independence, and a profound appreciation for a culture other than my own. Never again would I lack the courage to travel alone or to try something new.  Despite my mistakes, never again would I to doubt my abilities like I did the day I left America for the first time. France has become an integral part of me, and it has shaped my academic and career goals ever since.

Thank you France for inspiring me in a myriad of ways, for teaching me about myself, and for broadening my horizons and elevating my goals. It deeply saddens me that the recent events in Paris may prevent people from visiting such an awe-inspiring country. It is a grim reminder that violence can happen anywhere at anytime, but it should never sway our decision-making.  Life is full of risks, but from my experiences, the rewards are most always worth it.

Thank you Notre Dame for helping me to fulfill my dreams of adventure, and thank you France for never failing to exceed my highest expectations.