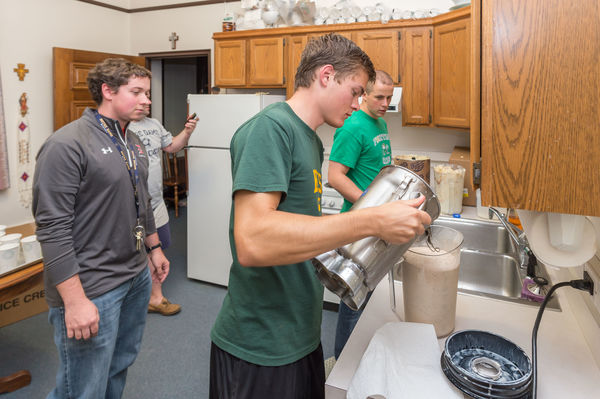 Thursday night. 10 p.m. Students crowd into one medium-sized room, chatter filling the air as everyone enters. There’s an energy that can’t fully be described, an anticipation that’s built up from the past week. Students are ready to celebrate together once again, excited to usher in the weekend, and perhaps enjoy a break from studying for that last test tomorrow.

Finally, everyone settles into their seats, and music begins to play. Voices fill the room as attendees sing the words to every song. Afterward, students linger and talk with one another over drinks.

No, this isn’t a party or a concert. This is Milkshake Mass.

At Notre Dame, every dorm has its own chapel, where they celebrate Mass every Sunday and a few times during the week. Many dorms serve food or snacks after one of their weekday Masses, and the most popular by far is Dillon Hall’s Milkshake Mass.

Each Thursday night, I feel so grateful to be surrounded by the Notre Dame faith community, all coming together to worship (and share delicious milkshakes afterward!). No matter how much work I have due the next day, setting aside that time for God always puts everything in perspective.

When I first heard about Milkshake Mass as a prospective student, I KNEW I had to attend. The hype made sense – what’s not to love about milkshakes and Jesus? Yet once my freshman year actually began and the work piled up quickly, the idea of Milkshake Mass was tossed to the side, Thursdays came and went, and it seemed like every week I was still finishing homework, studying for a test, or attending another event. Every Thursday passed like this until just before fall break. I had an unfinished chem project due the next day and was feeling completely overwhelmed. My best friend told me she was going to Milkshake Mass that night, and despite the parts of me that said to keep working on the project, I decided to go with her. Deep inside, I knew I needed to go, to turn to God even amidst the busyness of college life.

From that very first time, I was hooked. It was like nothing I’d ever experienced before. I’d been to Mass every week growing up, but the energy at Milkshake Mass was just different. People were excited to be there. Sure, the milkshakes were a refreshing late-night treat, but I didn’t come back because of the milkshakes.

I never expected to go to Milkshake Mass every week. But I returned each Thursday because I felt at home… at peace. There, in Dillon’s chapel, I set aside my personal fears and anxieties to focus on what matters most. During the Sign of Peace, I traveled across the room to hug friends and strangers alike. It felt like a five-minute-long affair, cut off by the piano music cueing everyone to return to their seats (the “Oscars” music of Mass). When the choir sang “Canticle of the Turning,” I sang without reservation, my voice entwined with those of the students all around me. And when I finally got my milkshake at the conclusion, I stayed and enjoyed conversations with friends and classmates as we recounted the events of the week to one another and looked forward to the weekend ahead.

Even though the Dillon community is living in the new Baumer Hall for the year as Dillon gets renovated, I make the slightly farther trek without any hesitation.

The milkshakes may have drawn me in at first, but I keep returning because the love of the Lord is even more satisfying!