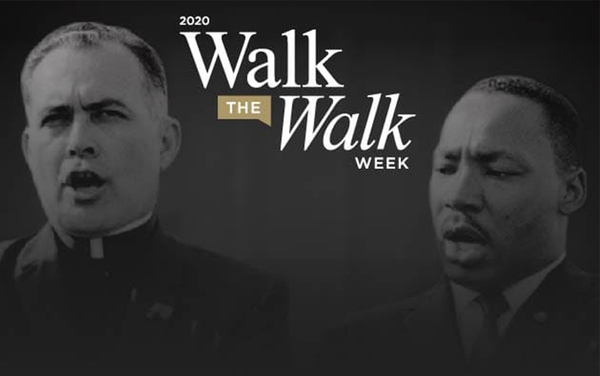 Martin Luther King, Jr.'s life accomplishments and the radical systematic and foundational change to which he ascribed, are what Notre Dame's Walk the Walk Week is intended to commemorate. At Notre Dame, it is refreshing to hear from diverse perspectives on such a seemingly obvious matter: people should not be judged based on their race, gender, ethnic background, religion, sexual orientation, or any other fixed characteristic. As we can see from the heightened political climate in the United States and globally, in addition to a new rupture from the path of social integration, the sad reality is MLK Day is more pertinent now than ever before as we continue our fight for further racial equality.

The most notable event from Walk the Walk Week is the MLK Day Luncheon, which features the amazing choir, Voices of Faith, insightful speakers from students and faculty and this year, a special guest speaker, Diane Nash. Nash is known for her awe-inspiring activism for racial equality through, most notably, that of desegregating lunch counters and interstate travel - through the Freedom Riders -, co-founding the Student Nonviolent Coordinating Committee, and assisting in helping the Voting Rights Act of 1965 get to Congress. These are not small feats toward racial equality, and it was truly an honor to sit in Nash's presence and hear her incredibly insightful comments founded on her activism and experience walking the walk with Martin Luther King, Jr. by her side.

The most soul-striking thing Nash said, in my opinion, was that "oppression can not occur without the participation of the oppressed." When we look at the current facts of society is that there is little galvanization in the black community toward a single goal that has compared to the Civil Rights Movement of the mid-20th century. For that reason, there has not been a single social issue that has been rectified to the same degree. Nash gave her insight on how we, as an oppressed community stemming from a dark five-century history, can create long-lasting change and follow in the footsteps of King.

Her steps are as follows, with my commentary:

The greatest way to overcome any adversity is through education. Through education, all people can be better informed on the value of diversity and the harsh reality of exclusion.

Building on the first step, it is extremely important that the black people are further educated in their history, the value in their uniqueness as well as the importance of their role in the United States.

As a people, we cannot without understanding and working within the system in place. This necessitates peaceful, direct, and purposeful negotiation with local leaders, state-wide policymakers, and most evidently leaders at the federal level.

This encompasses everything in the first amendment! It is everyone's right to embrace their rights to freedom of speech, freedom to assemble peacefully, and freedom to petition the government to redress grievances.

When demonstrations do not bring forth the change that is needed for true equality, resistance is the only way to bring it. No change worth having has come without resistance. Think about the American Revolution, the Civil War, women's voting rights, and the Civil Rights movement… all of these things have molded our society to be more encompassing, more inclusive, and more true to the "melting pot" dream.

Establish That the System Did Occur

Once resistance has brought forth change, the only way to dissuade history from repeating itself is to establish in education, legislature, and long-lasting institutions that the prior system did occur. Without knowledge, history is bound to repeat itself.

I believe there is no better way to summarize MLK Day, this past Walk the Walk Week and Nash's own individual efforts more than it is a call to activism and allyship among all parties. This past week at ND, there were incredible events and resources to develop people's understanding of racial injustice, progress toward equality, and the systemic issues that minorities - namely, African Americans - are facing in today's America. At the end of the week, I find that my mind keeps wandering back to Nash's concluding words: "Always make the decision that will allow you to admire and respect the person who you see in the mirror."