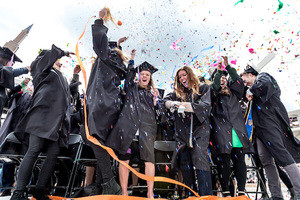 Most universities celebrate commencement with a commencement speaker, the selection of a valedictorian, the awarding of honorary degrees, and a procession of graduates in academic robes. These and many other commencement traditions are embraced by academia, but what do they mean?

On Sunday, May 21, Notre Dame graduates will take part in all the traditional pomp and circumstance during the University’s 172nd Commencement. And we’ve got the low-down on the robe, the mortarboard, and a couple of the more unique things about Notre Dame’s commencement weekend. 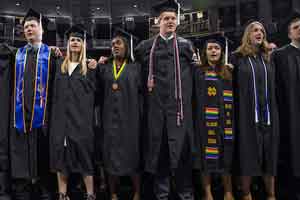 The traditional academic robe dates back to the Middle Ages, when graduates of some of the first European universities, usually aspiring clerics, wore them simply for their ability to hold in heat.

Since then, the robe, with its accompanying cap (more on that below) have been the official dress—or regalia—of scholars. Different robe colors were assigned to graduates based on degree level and those guidelines were standardized in the United States in the 19th century. 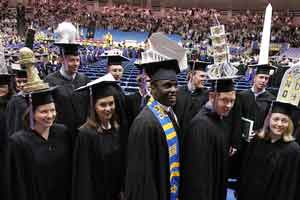 The mortarboard, or Oxford-type cap, has been adopted by most universities in the U.S., although Notre Dame’s doctoral cap is a royal blue tam. These hats became popular in the 14th and 15th centuries and were worn by artists, students, and other learned people. They are named for their resemblance in shape to the device utilized by masons to hold mortar.

Our graduates’ favorite thing about the mortarboard? Decorating it! Architecture students get especially creative, building models and small structures to attach to their caps. 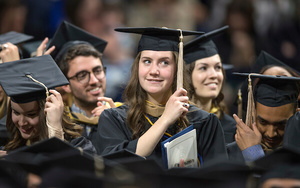 Colored tassels are usually worn by holders of bachelor’s and master’s degrees. These denote the field of learning. Gold tassels are reserved for those with doctorate degrees and governing officers of educational institutions. Tassels are worn on the right side and shifted to the left after the degree has been conferred—a truly celebratory moment in the commencement ceremony. 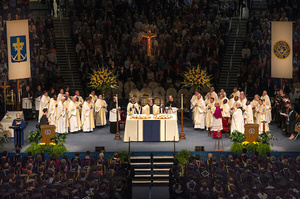 This is a Notre Dame tradition. Graduates come together to celebrate a final Mass as Notre Dame students. University President Rev. John Jenkins, C.S.C., presides, along with many Holy Cross priests acting as co-celebrants. In addition to this larger Mass, some colleges and departments host Masses for students graduating from a certain college or program. 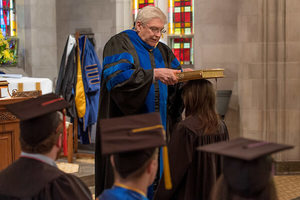 Many departments and programs across campus host unique ceremonies for their graduating students.

For example, the Medieval Institute's ceremony and reception take place on Saturday during commencement weekend. The ceremony is conducted entirely in Latin. It features a ceremonial “striking” on the head (really just  a touch on the head) with the Gospel Book acknowledging the conferral of an academic degree and, for graduate students, admittance into the ranks of Ph.D.'s.

Students also sign a register of graduates, sing the Salve Regina together, and each candidate receives a wax-sealed diploma printed in Latin. 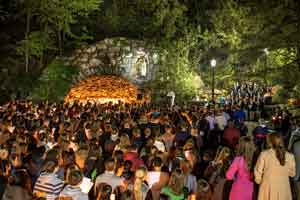 When finals are over and the last of the underclassmen and women leave for the summer, campus belongs to the seniors. This year, the Class of 2017 will celebrate with the traditional class Mass at the Basilica, as well as a bowling and trivia night, a trip to a Chicago Cubs game, the annual Commencement Ball, and DomerFest 2.0. DomerFest 2.0 harkens back to the DomerFest event during freshman orientation, where students first get to know their classmates. Seniors will also come together for a picnic and a last trip to the Grotto.

If you geek out about Notre Dame traditions like we do, visit our commencement traditions page, where you’ll learn the history of each element and find a schedule of events.

And to all our graduates, congratulations from the Office of Undergraduate Admissions!