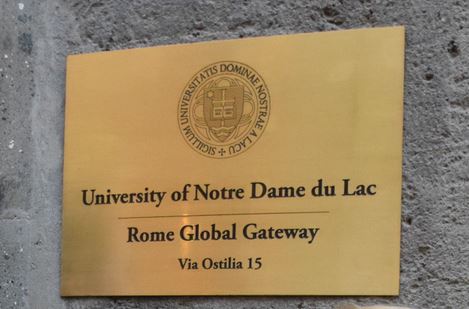 One of the many factors that influenced my decision to study architecture at Notre Dame was the allure of studying abroad in Italy for a whole year. Before college, I had never been out of the country. I grew up in a small town in Indiana, and I commuted to Indianapolis to attend high school at a private Catholic institution. Needless to say, my horizons were minimal, and Europe seemed like another world away to me. It was both terrifying and thrilling to imagine myself spending so much time in a place I had always dreamed of visiting.

This dream has quite abruptly become a reality as this summer comes to a close, and I embark on my junior year of college. On September 2nd, I will get on a plane to Rome, and I won’t be returning until next May.

Despite my part-time job working at Subway in LaFortune Hall all of my sophomore year, I had barely saved any money for my upcoming trip. As winter turned to spring, I began to panic and frantically researched summer jobs on campus. I was quite determined to work as much as possible and save money for food, architecture supplies, and traveling while in Europe.

Lucky for me, I was fortunate enough to land not one but two jobs for the summer. I was offered a job as the Hall Manager of Pasquerilla West through the Notre Dame Office of Housing, in which I would be responsible for the administration of the hall while high school students there for summer programs. In addition, I was given a job as a New Media Intern through Notre Dame Admissions and Recruitment. I updated the Tumblr page for Notre Dame Admissions and occasionally posted some photos on the Admissions Instagram as well.

While working for the Office of Housing and Notre Dame Admissions this summer, I also seized the opportunity as a note-taker for my Theology class through the Office of Disability Services. I was already enrolled in a summer class, and the job gave me extra motivation to make my notes extra detailed so it was a win-win scenario in my mind.

Nearly every morning, I would wake up early for class at 8:45 a.m., photocopy my notes in the Office of Disability Services, return to Pasquerilla West and meet with the housekeepers, update the Notre Dame Admissions Tumblr page, occasionally grab a meal, and work at the front desk in the evenings while residents were in the dorm. I worked over 40 hours every week, and I avoided spending money whenever possible.

It was the first time I had worked full-time for an entire summer, and it was exhausting at times, but still rewarding. It felt good to work hard in something other than schoolwork or athletics, which had consumed my previous summers in high school.

I am happy to share that I will continue to work as a New Media Intern during my junior year in Rome to blog about the architecture program and studying abroad in general. After several years of wishing to get accepted at Notre Dame, it has been an honor to share more about Notre Dame with potential students. It is bittersweet leaving the Notre Dame community, but I am beyond excited for the new experiences this year will bring!