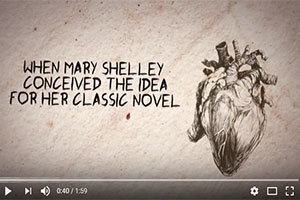 The 2016-17 FTT theatre season features productions of Frankenstein and Christ’s Passion: Medieval Mystery Plays, along with student-written plays, and acclaimed drama I and You.

If you love acting in school plays, critiquing your favorite TV shows, or playing the Hamilton soundtrack on repeat, the film, television, and theatre (FTT) major may be for you. FTT majors put their creative skills to work, creating documentaries, directing short films, producing plays, and attending film festivals near and far. Each year, the FTT department hosts its own film festival featuring student filmmakers as well as a four-show theatre season. And, for students who want to study abroad, there are FTT courses in Ireland, England, Australia, and France, among other countries. 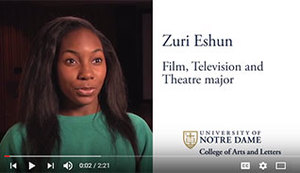 For Zuri Eshun, the FTT major is about watching ideas come to life. She chose the major with the intention of becoming a director and, while her concentration is in film, Eshun has had the opportunity to sample courses across the curriculum. Her Voice and Movement class, for example, has taught Eshun about how body language can be used to communicate with her fellow actors and her audience.

One of the most exciting opportunities the FTT major has afforded Eshun was her trip to the Cannes Film Festival. She and a group of seven other Notre Dame students were awarded a grant to produce a documentary about the festival. While there, the group attended red carpet events and got an insider’s look at the film industry.

Make it Your Own

Upon declaring the FTT major, students also choose a concentration. But with a focus on cross-curricular learning, Eshun says she has had the opportunity to create her own education within the department. In fact, each student majoring in FTT works with a faculty advisor to create an individualized plan of study based on his/her interests and goals.

Along with a solid foundation in industry basics with courses like Theatrical Production and Performance Analysis, the major offers a variety of electives to round out students’ experiences and provide a wealth of opportunities for academic inquiry.

Prepare for a Career You’ll Love 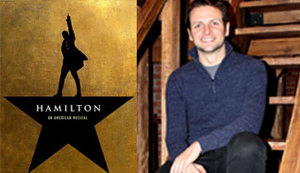 Patrick Vassel ’07 fell in love with directing at Notre Dame and now is associate director of the Broadway smash-hit Hamilton.

Whether you’re interested in working on-screen or behind the scenes, FTT will help you direct your talents and interests to a career that excites you. “FTT is the ideal major for students who want to explore—and produce—the arts and entertainment in the twenty-first century,” says Jim Collins, professor and department chair.

“We offer both a scholarly and a creative context for general liberal arts students at Notre Dame as well as those students seeking intensive preparation for advanced study in these fields," he says. "FTT majors may direct their creative passion, whether that’s making films, videos, or participating in theatre, to our courses of study that focus on production. The hands-on nature of our curriculum, coupled with a very high degree of student-faculty interaction, provides students with a singular educational opportunity.”

FTT graduates have gone on to head entertainment companies, contribute to major studio films like Matrix Reloaded and King Kong, and produce shows on networks like CBS and MTV.

When students graduate, they become part of a global network of alumni, including the iNDustry Alliance, which connects Notre Dame alumni within the media and entertainment industries in order to support networking opportunities and career development.

You can meet some of our alumni and learn about their careers here.

If you’re interested in FTT, visit the department website to learn more about our students and faculty and find answers to common questions about the major.